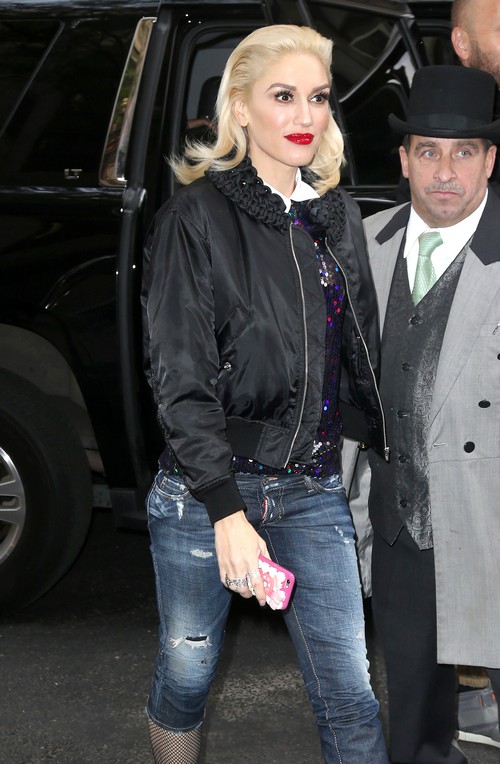 Gwen Stefani has become so obsessed with her new boyfriend Blake Shelton that she cannot stand to be away and it became even more obvious when the “Used To Love You” singer was caught Facetiming her lover while boarding a plane!

Gwen and Blake have been spending a lot of time together and they really seem to be having a great time in their new-ish relationship. Stefani can’t seem to leave her new lover alone even for a few minutes lately. To prove just how obsessed Gwen has become, she was caught video chatting with Blake at the airport while boarding a private jet in Van Nuys on Friday, November 20.

Gwen and her “Sangria” singing boyfriend are so joined at the hip that Stefani can’t even get on an airplane without giving Blake the play by play. E! News reported that Gwen was chatting with Blake on her phone from the time she got to the tarmac and exited a black SUV all the way up until she boarded the private jet.

Stefani reportedly chatting up her country singer boyfriend while turning her phone to show Shelton her jet and she even had him say hi to a friend who was also boarding the jet.

Gwen Stefani and Blake Shelton have only been public with their relationship for a few weeks now. The lovebirds are acting like it was a huge relief to finally be able to spend time together without going to great lengths to keep their secret.

Shelton announced his divorce from Miranda Lambert in July while Stefani didn’t finalize her divorce from Gavin Rossdale until October.

The way Gwen and Blake have been acting now that their relationship is public makes some wonder just how long they have been dating. Gwen has already flown to Oklahoma with Blake to meet the family and reportedly has an invite to head back there for Thanksgiving dinner.

Blake and Gwen are joined at the hip both on “The Voice” and pretty much everywhere else. Gwen Stefani has been happier than ever in recent weeks and she is absolutely glowing. We just hope the love lasts with Blake Shelton because Gwen has obviously fallen so hard that she can’t go a minute without her new man.