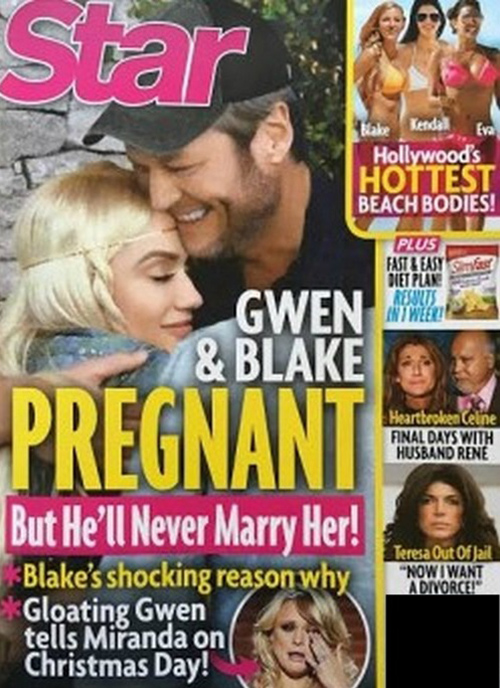 Is Gwen Stefani pregnant with Blake Shelton’s baby? According to this week’s edition of Star Magazine, the former Voice Coach and her new beau have a baby on the way, but don’t expect them to get married and walk down the aisle any time soon. The cover features a photo of the PDA-loving couple, and the headline screams, “Gwen And Blake Pregnant – But He Will Never Marry Her!”

According to Star Magazine, all of the tell-tale signs are there. Gwen Stefani has been spotted by sources avoiding alcohol over the holidays and working out much less than usual. An insider dished to Star Magazine, “No one would be surprised if she turned out to be pregnant.”

Gwen and Blake have been spending plenty of time together, and have definitely had enough time to make a baby – but it seems a bit crazy seeing as how Gwen’s divorce from Gavin Rossdale still isn’t final.

What is most interesting is the fact that Blake has no desire to marry Gwen. Is it just because his last marriage ended in disaster? Or could it possibly be because technically Gwen isn’t officially divorced from Gavin Rossdale yet? In present times, it’s really not that unusual for couples to start families together all while not having the same last name.

Star Magazine also implies that Miranda Lambert is totally devastated by the pregnancy news – and if Gwen is pregnant, then we totally buy that. It’s no secret that Miranda Lambert has desperately wanted a family, and whether or not to have a baby was one of the many things that is rumored to have ruined her marriage to Blake Shelton.

Recent reports actually indicated that Miranda was so ready to be a mother that she was actually considering adopting a baby or finding a sperm donor. If Blake went and had a baby with his new girlfriend just a few months after their divorce, that would be the ultimate slap in the face.

What do you guys think? Is it possible that Gwen Stefani is pregnant with Blake Shelton’s baby? How will that influence her divorce proceedings? And how will Blake’s ex-wife Miranda Lambert react? Let us know what you think in the comments below!