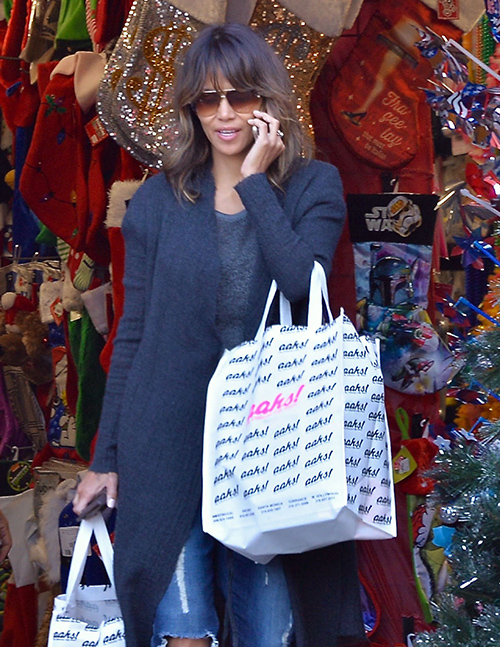 Halle Berry has barely been single for two months – but the actress is not letting a little thing like a divorce rain on her parade.  On October 27th news hit the internet that Halle Berry and her husband Olivier Martinez had called it quits after 2 years of tumultuous marriage – and they were filing for divorce.

Halle Berry has two different baby-daddies, and you would think she would be laid up at home eating Ben & Jerry’s and crying herself to sleep, but that’s not the case.  Actually, it is quite the opposite.  According to the Daily Mail, Halle seems to have already forgotten about her now ex-husband Olivier Martinez, and she has been partying like a rockstar and on the prowl for a new man.  She bounces back quick!

A source told Naughty Gossip that Halle Berry was recently spotted out on the town with not one guy but an entire group of guys and, of course, they were all catering to her every whim.  The insider dished to the website, “She was with a group of guys and they had a table. They were drinking Champagne.  At one point she (Halle) wandered onto the dance floor by herself and was dancing with different guys.  The guys she was with spent a lot of money.  They bought several bottles of expensive Champagne, on top of bottle service. She was definitely drinking and partying and having fun. Whenever she went to the dance floor she went by herself, not with the guys she was with, and was dancing and drinking. It looked like she was trying to pick up a guy.”

We are all for “Girl Power” and moving on, and we love a cougar … BUT, isn’t this what got Halle Berry into this mess to begin?  She was looking for a rebound after her first baby-daddy Gabriel Aubry?  What do you guys think?  Is Halle moving on a bit too fast?  Should her pals be worried she is just headed down the same old road?  Share your thoughts in the comments below!