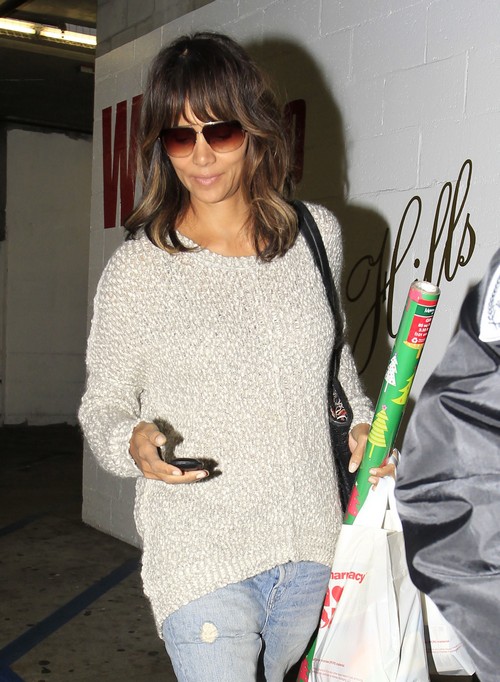 Halle Berry has been spotted with rapper Chris Webby, who is reportedly her new man although their relationship is very casual. It didn’t take long for Halle Berry to move on after announcing her divorce from Olivier Martinez. Halle has been allegedly partying a lot after getting rid of hubby number three.

Halle and Olivier filed for divorce from each other at the end of October after two years of marriage. Berry was immediately criticized for the explosive endings of her two previous marriages plus a very bad breakup from ex-fiance Gabriel Aubry.

For years Halle has been criticized for her inability to keep a man but on the other hand it never takes long for the actress to find a replacement.

According to Star magazine, Halle has a man but has seen out partying both with and without her new 27-year old boy toy. Halle was seen letting loose while out partying with a group of guy friends a few weeks back and Chris Webby was nowhere to be found.

Apparently Halle is free to play around though and that’s exactly what she did at The Argyle Hollywood nightclub at the end of November.

The steamy report claims that Berry was boozing it up at a VIP table before she hit the dance floor alone. It didn’t take long for a few younger guys to spot the 49-year old stunner working the floor. Halle reportedly flirted up a storm with the other clubgoers before heading back to her own table of friends who all left together around 1 a.m.

Halle Berry must not have been looking for a hookup at The Argyle Hollywood because another Star source claims she already has one. Berry has been spotted spending time with Connecticut-raised hip hop star Chris Webby.

Chris and Halle met several months before she parted ways with Olivier Martinez It’s unclear if Berry was messing around with the hip hop star before announcing her divorce or if the new friends with benefits waited to start messing around.

Of course Berry and Webby want everyone to think they didn’t start hooking it up until after Berry was a free woman.

In any case, Chris Webby and Halle Berry aren’t an official couple according to Star. Instead the report claims that the superstar actress is taking it slow and hooking up with her hip hop hottie when their schedules aren’t too full.

Halle Berry was spotted leaving CVS pharmacy in Los Angeles where she shopped for some christmas supplies on December 18, 2015. FameFlynet