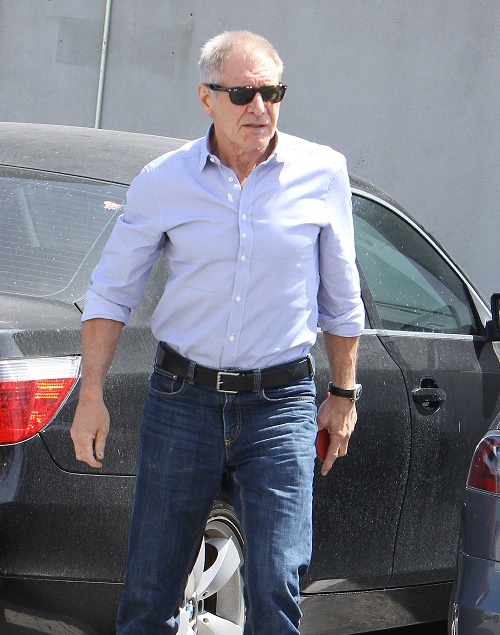 Harrison Ford and Calista Flockhart’s marriage has been under a lot of strain since the actor’s nearly fatal plane crash earlier this year, and now they are reportedly on the verge of a $224 Million divorce. Harrison has not been the same since his accident, which is to be expected. Previous tabloid reports revealed that Calista has been waiting on him hand-and-foot, and he has been lashing out at her despite all of her hard work to make him comfortable.

The July edition of National Enquirer reveals that Harrison and Calista’s marriage woes took a turn for the worse on June 13 when Calista ditched her husband on their wedding anniversary, and flew out of state with her son Liam to visit some family. An insider dished to the tabloid, “Calista was apparently going to visit family, but the fact that she left on her wedding anniversary placed a lot of strain on their already strained relationship. This was a special anniversary, their fifth, and their first since Harrison was nearly killed in his recent plane crash. But, Calista decided to leave that day.”

Calista has been caring for her husband since his plane crash, and she didn’t ask for anything in return except for that he give up flying after nearly dying. But Harrison didn’t respect Calista’s wishes – and according to the National Enquirer, he hopped in his helicopter on May 28 and took off. Since then he and Calista have been fighting like cats and dogs. Rumor has it that a divorce is right around the corner.

We totally get where Calista is coming from, not wanting her husband to put himself in unnecessary danger after nearly losing him. But, at the same time, Harrison is passionate about flying, and it is a lot to ask someone you love to give up what they love. What do you guys think? Will Calista and Harrison be able to work out their problems? Share your thoughts and theories in the comments below!