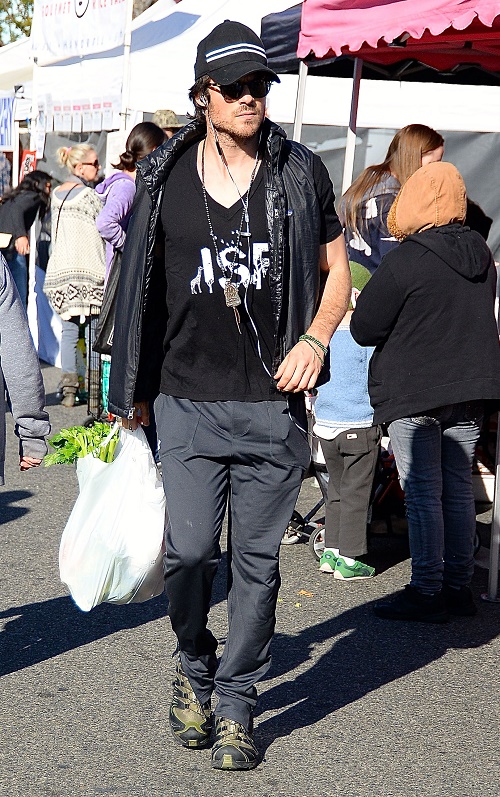 We’ve mentioned before that Ian Somerhalder and Nikki Reed seem to be in some sort of race with Nina Dobrev and Mark Foster, whether it’s intentional or unintentional. Even though Nina Dobrev and Mark Foster have yet to go public with their relationship, both couples have reportedly gotten very serious in a short amount of time. In fact, from what we’re hearing, engagement bells could be on the horizon for either or both of them.

Ian Somerhalder and Nikki Reed were actually spotted holding hands and showing PDA while shopping at a jewelry store in West Hollywood. Obviously, the PDA, the hand-holding, and the fact that they were shopping at a jewelry store has already caused people to jump to conclusions about a possible engagement and wedding. Even though photos showed Ian and Nikki looking at a necklace in the store, previous reports have alleged that Ian was actually looking at engagement rings earlier this week.

While he reportedly did not leave with a ring at that time, he’s clearly interested in proposing to Nikki, and I wouldn’t be surprised if the two got engaged over the next few months. Of course, Ian reportedly wanted to get engaged to Nina as well, so I can’t imagine that she’ll be too thrilled to hear about this. But then again, Nina was allegedly the one who broke things off with Ian because she didn’t want to get serious and settle down at such a young age. But even if she doesn’t get engaged to Mark Foster, that doesn’t mean that she’s going to be thrilled about Ian’s engagement, especially with all the PDA and non-subtle hints he keeps dropping.

What do you guys think? Does Nina Dobrev have a right to be angry and/or jealous about Ian proposing to Nikki? Let us know your thoughts in the comments below.