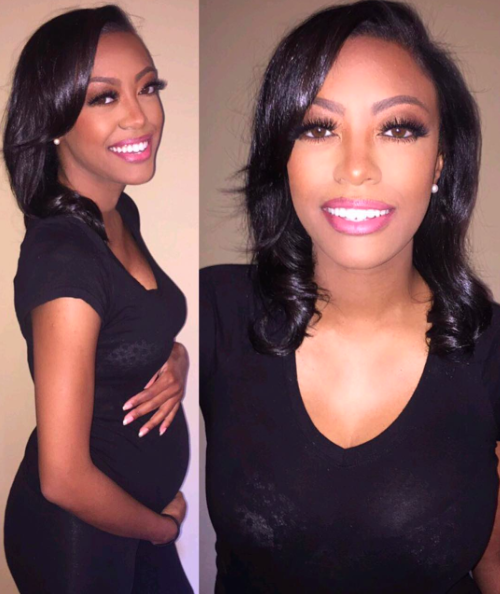 “The Real Housewives of Atlanta” Porsha Williams‘ posted photos of appeared to be her with a baby bump to her Instagram account. This riled up fans – and maybe even pregnant co-star Kandi Burruss!

Let’s start with the photos of a Porsha look-a-like with a baby bump. Fans didn’t really read the caption all that well – and it was just a little bit cryptic. A few offered congrats before they realized that it was Porsha’s SISTER who is pregnant and posing in the photos! But before this could be clarified word may have gotten around to “RHOA” co-star Kandi Burruss and pissed her off – because SHE wants HER pregnancy to be the talk of Atlanta and the new season of “The Real Housewives of Atlanta” NOT Porsha’s!

Lauren Williams – Porsha’s little sister – is about 24 weeks along. And if that’s true then she is due right around the same time Kandi Burruss is expecting her first baby with hubby Todd Tucker. The former Xscape singer can’t seem to cut a break and get the “RHOA” spotlight to shine solely on her. Her struggle with trying to get pregnant was supposed to be the main storyline of last season’s show. It ended up that Phaedra Parks drama with estranged husband Apollo Nida and his legal problems – and their marital problems – ended up eclipsing Kandi and Todd.

But not to worry – Porsha Williams isn’t pregnant – at least not yet. Hopefully the addition of new cast member Kim Fields won’t push Kandi and Todd’s baby news into a corner. Without the pushy NeNe Leakes around to hog up all the attention maybe some of the other ladies of the ATL can get some attention without NayNay around.

Porsha Williams is single right now – she just broke up with her boyfriend Duke Williams – a safety for the Buffalo Bills. She cited that the long distance was what caused the end of her relationship. But rumors that her beau – who is 10 years younger – is expecting a baby with his unnamed former girlfriend. Fans will just have to wait and see what happens when the new season of “The Real Housewives of Atlanta” begins airing on Bravo in November.

Are you a fan of The Real Housewives of Atlanta?  Check out all the most current RHOA news, RIGHT HERE!