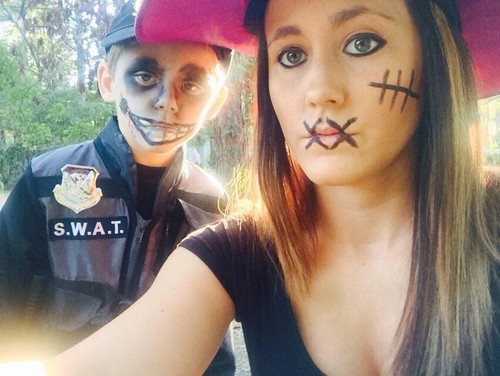 According to an all new report Jenelle Evans was charged with assault and arrested by the South Carolina police after she attacked her ex-fiance Nathan Griffith’s new girlfriend with a glass. Jenelle and Nathan recently broke up for the umpteenth time, and Nathan showed up at the house to get his belongings. And, in case you didn’t know Nathan isn’t the sharpest tool in the shed – and he made the ridiculous decision to bring in his new girlfriend in to Jenelle’s house to help him pack up his stuff.

Seriously? Jenelle Evans has been arrested for assault how many times? Her arrest record is longer than a roll of toilet paper. We have no pity for anyone who is crazy enough to hook up with her ex-boyfriend and then have the nerve to walk through her front door. Talking a walk across the freeway during rush hour would probably be a safer way to spend your afternoon. According to TMZ, Jenelle threw a glass at Nathan’s new girlfriend and hit her in the head. Frankly, the girl is probably lucky she got out of there with just a banged up skull – Jenelle is cray cray.

Did we not call this last week when Jenelle was photographed hanging out with her ex Keiffer Delp? CDL exclusively announced it was the beginning of the Teen Mom 2’s annual train wreck, and it was only a matter of time before she began getting arrested every other week. Jenelle’s rep informed TMZ that it wasn’t Jenelle’s fault – and Nathan and his girlfriend were “antagonizing her.” Apparently, it is totally acceptable to hit people over the head with dishes if they are “antagonizing you.”

Do you think that Jenelle Evans’ actions were warranted? Could she actually be headed to jail this time? Let us know what you think in the comments below!