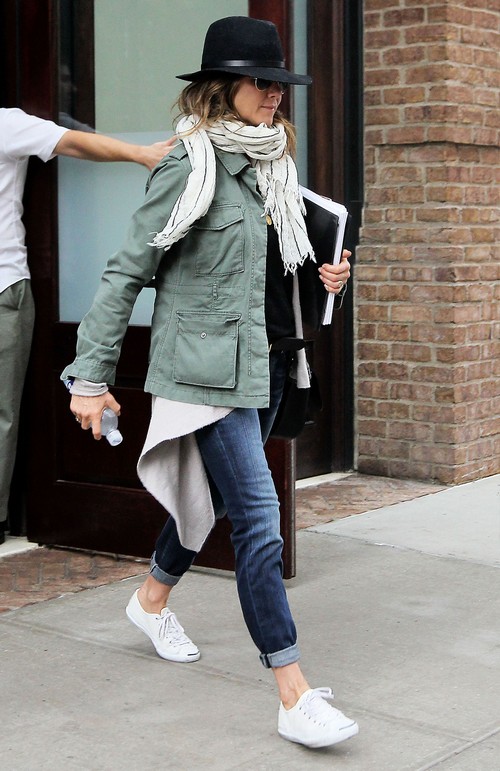 Jennifer Aniston and her husband Justin Theroux are fighting like cats and dogs…over David Beckham?Apparently, Jennifer Aniston is not immune to Beckham’s power over women, and just like us – she has a huge crush on him. However, her “crush” is making her hubby Justin Theroux a jealous mess, and the fact that David Beckham is his partner and BFF is only making the situation messier.

This week’s edition of The National Enquirer reveals that Justin Theroux and David Beckham recently partnered up to design a new clothing line of “edgy motorcycle gear” together – but when Jennifer met her husband’s new business partner, she totally threw herself at him!

An insider dished to The National Enquirer, “Justin blasted Jen for practically drooling over David when they got together. He was mortified that Jen acted like a lovestruck schoolgirl around David, feeling his muscles and raving about how handsome he is.”

To add insult to injury, Justin Theroux also reportedly found a screensaver on his wife’s computer of David Beckham in nothing but a speedo. The National Enquirer went on to explain that Justin is tired of the “double standard.” Apparently, his wife has lashed out at him for checking out other women – so it doesn’t seem fair that she is allowed to drool all over David Beckham.

There is definitely a double standard – in everyone’s marriage. For some reason women are considered less likely to act on their crushes than men are. But, in Jennifer Anniston’s defense – have you saw David Beckham lately?!

What do you guys think, is Justin Theroux over-reacting or does his wife Jennifer need to reign it in a bit? Would she ever actually cheat on Justin – or is it nothing more than a crush? Let us know what you think in the comments below!