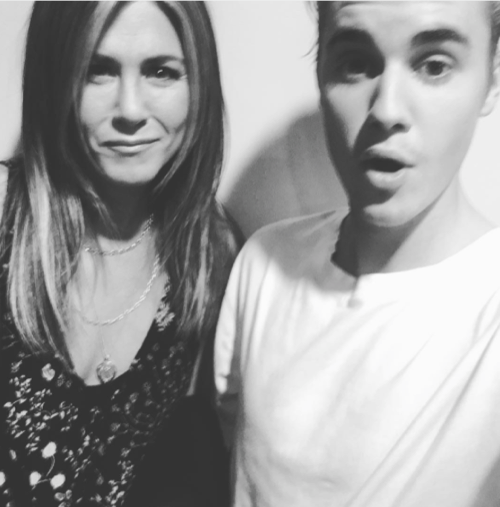 Selena Gomez and Justin Bieber dating and reunion rumors are in high gear – and SelGo’s new bestie Jennifer Aniston might be forcing the on-again-off-again couple back together. Is a photo of the Biebs with Aniston on Instagram a message to Selena?

In the black-and-white Instagram photo Jennifer is smiling but Justin looks a little surprised – as if something caught Bieber off-guard right before the photo was snapped. Did Aniston tell Justin that he should not give up on SelGo romance just yet? Is Jennifer giving Justin a giant push to reunite with Selena?

The photo of Aniston and Bieber could mean nothing at all – two celebrities hanging out at the same place and snapping some selfies. The Biebs new CD “Purpose” drops on Friday, November 13 and the “Strong” singer has been popping up all over the place – restaurants, nightclubs, talk shows. Who knows where Jen and Justin were when the picture was taken.

But the photo could be Jennifer sending Selena some advice. Does SelGo’s new mentor think Justin Bieber and Selena Gomez should reunite? Justin has proclaimed “undying love” for Selena – does Jennifer Aniston think the couple think should give the romance another shot?

On Gomez’s part – these two can’t seem to top talking about each other – she revealed in a recent interview that there are no hard feelings toward Bieber and that there has been closure. In the same sit down Selena said that Jennifer has become a good friend and SelGo can pop in on Jen anytime for advice – and pizza.

Maybe Selena can have a sleepover at Jen’s Malibu mansion, order pizza and talk about that selfie with Justin Bieber. Who knows, Jen might advise SelGo to give the Biebs another shot! Even though Selena is insistent that she is O-V-E-R Justin – the Biebs does not seem to be over Gomez. But SelGo should be careful – Jen is allegedly going through a rough patch with new husband Justin Theroux.

What do you think? Is Jennifer Aniston playing re-matchmaker for Justin Bieber and Selena Gomez? Or is the Instagram photo just two Hollywood celebs hanging out taking selfies?

Let us know what you think in the comments section below and come back to CDL for updates on Selena Gomez and Justin Bieber and all your celebrity news, gossip and rumors.