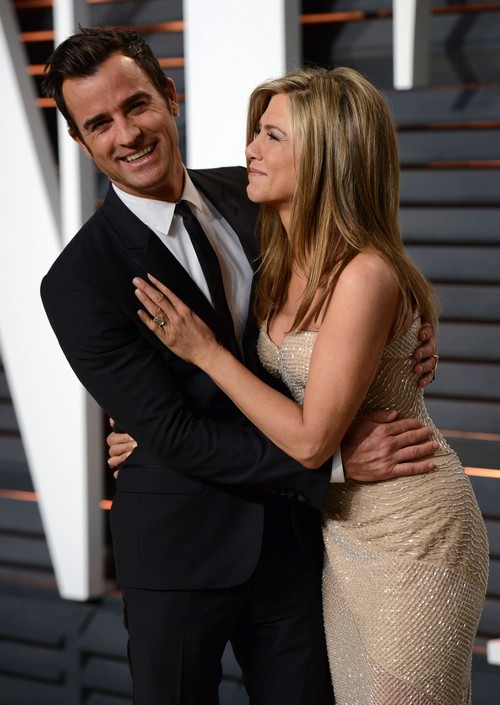 Jennifer Aniston and Justin Theroux have by far the longest engagement in Hollywood – and now that he has been trying to hook up with Selena Gomez, the odds of them ever getting married and saying their “I Do’s” are slim to none. Jennifer Aniston and her fiancé Justin were finally making plans for an elaborate and long overdue wedding in 2015 – but the hard-work and planning appears to have been all for nothing because Justin’s crush on Selena Gomez has caused a major riff in their relationship.

The March 30th edition of National Enquirer reveals that Justin made a move on Selena Gomez at the Vanity Fair Oscar Party, and shocked and embarrassed his fiancée Jennifer. An insider at the Vanity Fair party dished to the magazine, “Jen was in a booth showing her friend Amy Adams pictures on her phone of floral and seating arrangements for the wedding, when she looked up she saw Justin trying to dirty dance with Selena. Jen thought Justin was making a fool of himself by hanging on a girl young enough to be his daughter. Plus he was breakdancing and flailing all over the floor trying to impress Selena” The magazine’s sources go on to say that at some point in the night Justin Theroux even kissed Selena Gomez!

After the Vanity Fair Oscars Party, reports hit the internet of Selena Gomez kneeling on the pavement and crying outside of the party – we all assumed it had to do with the men in her life, Justin Bieber or Zedd. But, if our mentor’s fiancée tried to kiss us and us all night, we would probably go outside and cry too. According to National Enquirer, Justin and Jennifer didn’t exactly leave the party in good spirits either, “Jen lit in to Justin and told him to get over his creepy old man crush on Selena. Jen knows Justin is a flirt, but she thinks that he has really crossed a line with Selena.”

How creepy is Justin Theroux’s infatuation with Selena Gomez? Do you think this could be the final straw for him and Jennifer Aniston? Or could they still get married? Share your thoughts in the comment section below!