Jennifer Garner Out With New Boyfriend on Halloween: No Ben Affleck Reconciliation (PHOTOS) 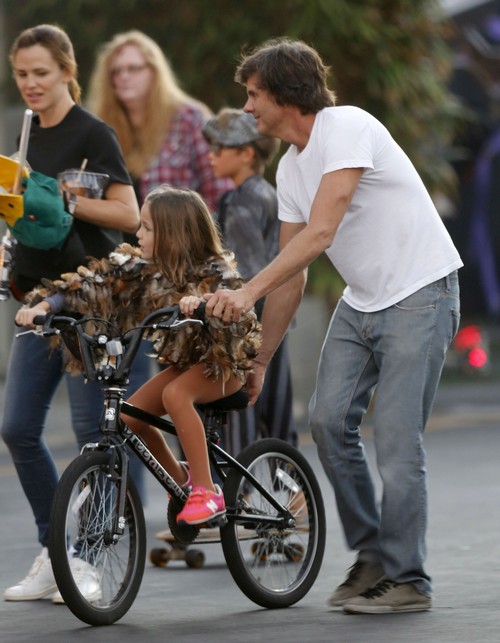 Jennifer Garner blew all the rumors about her supposed reconciliation with Ben Affleck out of the water when she showed up on Halloween with a new mystery man. Garner skipped dressing herself up for the festive holiday but Jennifer didn’t miss out on trick or treating with her kids. The man she brought along though was definitely not Ben Affleck.

We still don’t know the identity of Jennifer Garner’s mystery Halloween date but he definitely was no stranger to his kids. The handsome hunk was spotted wearing blue jeans and a white t-shirt while assisting Jennifer’s 6-year old daughter Seraphina as she tried to pedal her bike.

Jennifer Garner stayed strong for her three children after she and Ben Affleck announced that they were divorcing after 10 years of marriage back in July. Soon after the shocking divorce report, rumors of Ben Affleck’s wandering eye started to pop up. It didn’t take long before reports surfaced of Affleck’s inappropriate relationship with their former nanny Christine Ouzounian.

Garner has not been romantically linked to anyone after her split from Ben Affleck. As a matter of fact, gossip hounds were sure that the “Daredevil” actress was still working to get her relationship with Ben back on track. Reports of reconciliation nag at the couple every time they are photographed out together.

The rumors revved back up last week when Jennifer Garner and Ben Affleck were seen out shopping for groceries together and their kids were nowhere to be seen. Ben and Jen seem to get along when they are together but now it looks like there won’t be a divorce cancellation for the former lovebirds.

We’re really curious how Ben Affleck feels about having another man help raise his kids. It’s one thing to watch your ex move on with another man but this guy was helping Ben’s youngest daughter learn how to ride a bike.

Ben Affleck was nowhere to be found on Halloween and his kids ended up trick-or-treating with Jennifer Garner and her new hunky boyfriend. Rumor has it that Ben was too busy working and stayed on the set of “Live By Night” while Garner took care of the parenting duties.

Garner was seen dropping dropping the kids off at school earlier in the day. Seraphina was dressed up as a duck and Samuel was dressed as possibly a bush. It was later that night that Jennifer Garner was seen out with her three kids and another man for Halloween and Ben was nowhere in sight.

Does Jennifer Garner have a new boyfriend? The actress and her daughter enjoy Halloween with a handsome mystery man who was very hands-on helping Serpahina ride her bike on October 31, 2015 in Malibu, California. FameFlynet