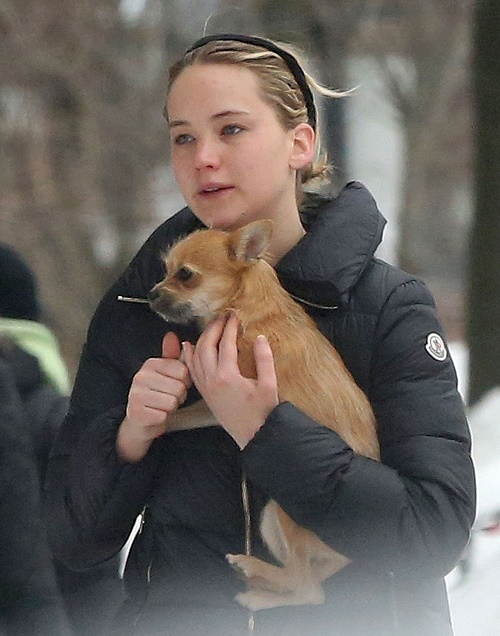 Chris Martin and Jennifer Lawrence have been not so quietly dating for months now – despite the fact that Chris is still technically married to Gwyneth Paltrow and the couple still has not legally filed for divorce. When Jennifer Lawrence rose to super stardom in the Hunger Games movies, she was dubbed a “wild child,” and well-known in Hollywood for doing what she wanted to do it, when she wanted to do it. The actress openly smoked weed – and was even photographed doing so on a balcony with pals, when she wasn’t out partying with her former boyfriend Nicholas Hoult. But, since 24 year old Lawrence began dating Chris Martin, her fun and care-free demeanor seems to have disappeared altogether.

According to the March 23rd edition of OK! Magazine, “The Oscar winner has purposely been toning down her goofy persona and her social life since she started dating the Coldplay frontman. Chris is conservative, especially in social settings and it has rubbed off on Jen, who is learning to keep some things private.” Chris Martin is 38 years old, making him a whopping fourteen years older than Jennifer Lawrence. So, we’re not exactly surprised that the actress has mellowed out since she began dating Gwyneth Paltrow’s husband – but we miss goofy and spontaneous J-Law.

Jennifer Lawrence is 24 years old, a world renowned actress, and has millions of dollars at her disposal – she should be out celebrating life and having a good time. Jennifer’s friends are not fans of the new boring homebody that Chris Martin has turned their goofy pal in to. In Jennifer’s defense, if she truly wants to be with Chris then she had to tone down her partying and grow up quickly – because we all know Gwyneth Paltrow would use Jennifer’s partying as an excuse to keep the kids from Chris.

What do you think of the new boring Jennifer Lawrence? Do you think that she should be out having fun instead of playing house with Chris Martin? Will she regret missing out on her younger years because she was trying to be mature enough for her 38-year-old boyfriend? Let us know what you think in the comments below!