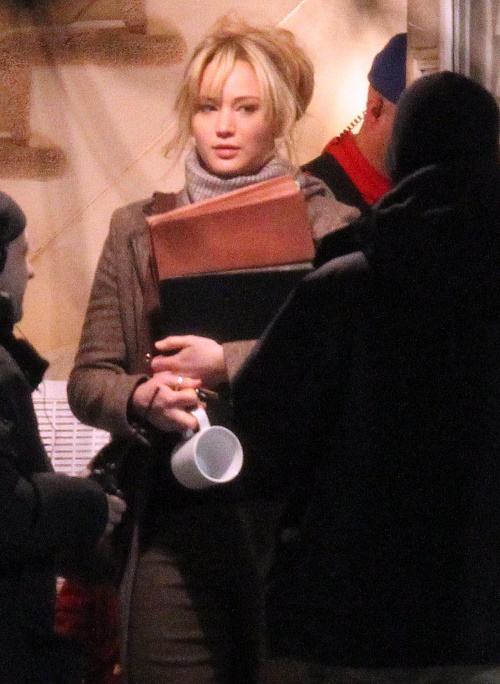 Jennifer Lawrence, Harvey Weinstein, and David O. Russell have all worked together before, but according to new reports, they are currently butting heads on the set of David and Jennifer’s latest film, Joy.

David O. Russell has a very public reputation of losing his temper on film sets, infamously getting into a fist fight with George Clooney on the set of Three Kings. And both Harvey Weinstein and Jennifer Lawrence have very strong personalities, so it’s not surprising that the trio would be fighting with each other. In fact, I’m actually surprised there weren’t more disagreements when the trio was making Silver Linings Playbook, especially since that was the film where all three worked together.

Anyway, the report from TMZ states that David O. Russell went into a temper tantrum-induced rant against Jennifer right before she had to do a scene. Apparently, the rant was filled with profanities and screaming and yelling, but another source claims that it was just method-acting to get Jennifer ramped up to do another scene where she had to yell at someone.

Ok fine, they have their excuses there – and Jennifer has admitted that she doesn’t mind David’s way of directing. But the same sources also add that when Harvey Weinstein dropped in on the set to visit Jennifer, David O. Russell made him leave before he could even get to the makeup trailer. Apparently, an executive from the movie’s studio, Fox 2000, told Harvey that his visit would serve as a distraction for Jennifer, especially since filming was moving at such a rapid pace. But Harvey Weinstein isn’t used to being told no, so he obviously turned up at the set anyway – and then got promptly removed.

If that wasn’t enough, David O. Russell is also going around and yelling at line producers and executives, in addition to actresses and studio honchos. Apparently, David and an executive from the studio got into an argument over a line producer that he wanted to fire, and the exec was apparently reduced to tears after the argument. Oh, David O. Russell – making people cry since 1999.

More and more, all the stories about David O. Russell seem justified, especially when he’s clearly this much of a nightmare to work with. But Hollywood is one of the few industries that rewards asshole behavior if the monetary gain is worth it, and his movies – especially recently – have always been successful at the box office in addition to bring critical and awards darlings.