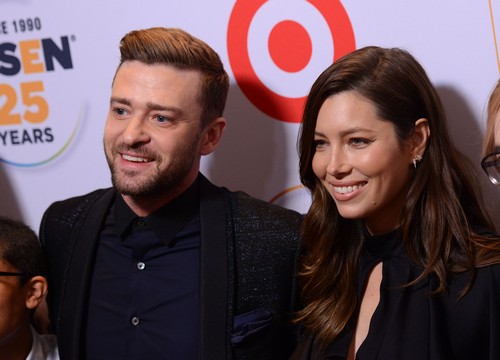 Jessica Biel is considering a divorce from Justin Timberlake according to reports that accuse the “Mirrors” singer of being way too controlling and that his constant over-parenting is destroying their marriage. Jessica and Justin are at odds about everything and while Jessica is yearning for freedom from the stressful relationship, Justin is doing everything he can to get Jessica to stick around.

Justin and Jessica’s son Silas is 7 months old now and Jessica is finally getting the courage to tell her husband bye, bye bye. The “Seventh Heaven” star is reportedly done with Timberlake and can’t wait to move on with her life according to a recent In Touch report.

Apparently Justin wants Jessica to settle into her role as a mother and take a big break from acting. That isn’t in Biel’s heart though and she’s starting to resent Timberlake for asking her to give up her dreams in order to fulfill his.

The gossip site has a source claiming, “Since becoming a mom, Jessica has gained confidence. She’s eager to act more.” Now that baby SIlas is starting to get bigger, Biel wants to get back to making movies before she becomes obsolete.

That doesn’t sit well with Justin Timberlake though who wants his wife to stay home baking cookies and tending to the kids. Timberlake is a good ol’ country boy at heart and Jessica should have known what she was getting into. The “Suit & Tie” singer wants a traditional family and if he had his way, they would be working on baby number two right now.

Jessica Biel is not interested in baby making and has put her foot down on getting pregnant again. Biel has been putting distance between herself and Timberlake and the former Mouseketeer knows she’s about to drop the big D on him.

Timberlake has been gushing about his love for Jessica Biel recently. Back in October when he was inducted into the Memphis Hall of Fame, Timberlake said during his acknowledgement of the honor, “Baby, I love you more than I could put into words and more than any song I could ever write.” Will Justin Timberlake be able to win Jessica Biel back before they end up divorce like so many other Hollywood couples?