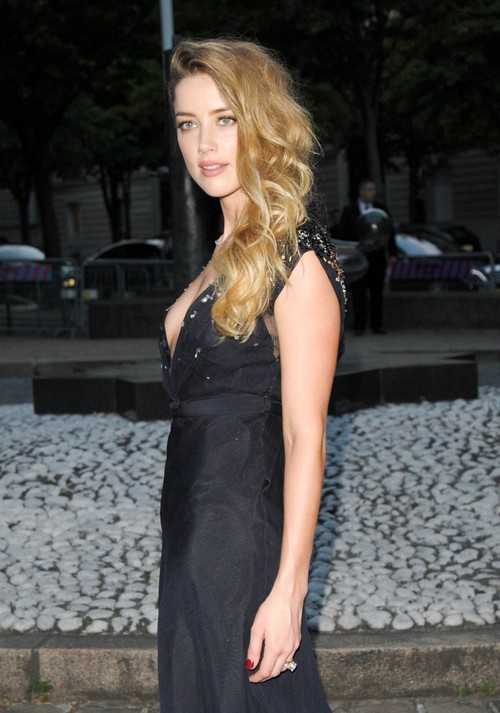 Did Johnny Depp and Amber Heard break up? Divorce rumors have plagued the Pirates of the Caribbean star and his much younger wife for months now, combing with alleged cheating and excessive drinking – their relationship is basically a disaster waiting to happen. Amber Heard was recently spotted out partying the night away, and her husband Johnny Depp was nowhere in sight, further fueling speculation that the couple is no longer together.

The July 20 edition of OK! Magazine reveals, that Amber Heard stepped out in London to promote Magic Mike XXL and was pounding drinks all night with her cast and crew. We all know Johnny Depp is not one to sit out a party, and it seems a little strange that Amber was out until the wee hours of the morning without her husband. OK! Magazine dished, “The 29 year old actress seemed to be holding it together at first as she stopped and signed a few autographs for fans, but she wobbled as she got closer to her waiting car and needed help getting in.”

The tabloid published a few photos of Amber being sloppily helped in to her car with her eyes barely open, and let’s just say the Magic Mike XXL star has definitely seen better days. So, where was Johnny Depp? Was he just busy with his own movie Pirates of the Caribbean? If that is the case, then why was Amber out partying all night without her husband?

Johnny Depp and Amber Heard’s marriage has been rocky, at best. So no one would be surprised if the couple did break up and file for divorce at this point. It seems like the two celebrities are basically poison to each other, and bring out the worst in each other. What do you guys think, have they broken up? Is that why Amber was out solo? Share your thoughts and theories in the comments below!