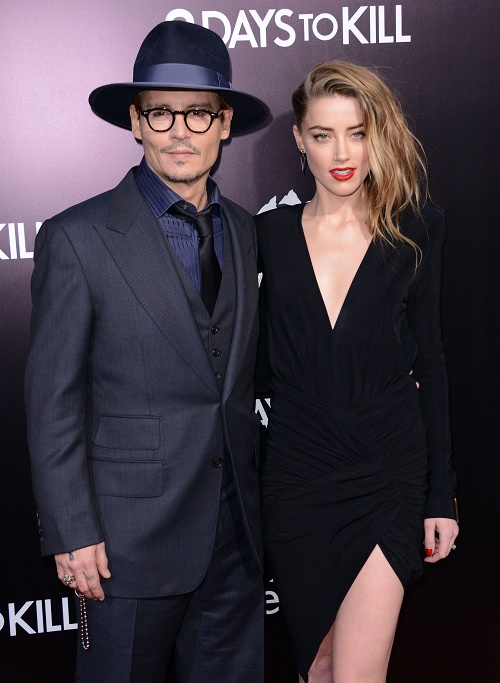 Johnny Depp and Amber Heard got married in February 2015, and it will be a miracle if they make it to their 6-month wedding anniversary without filing for divorce. Ever since 52-year-old Johnny and his much younger wife tied the knot in their small and private wedding, they have been fighting like cats and dogs; Johnny has been drinking like a fish and Amber has been allegedly cheating on him. It’s safe to say that getting married did not bring them any closer – if anything, it brought them farther apart.

The June 29 edition of Life & Style Magazine reveals that just when we thought Johnny and Amber’s marriage couldn’t get any worse – it has. Johnny Depp has a knack for taking a bad situation and making it worse. As if fighting with his wife Amber Heard non-stop wasn’t bad enough, he made the mistake of turning to his ex-wife Vanessa Paradis for advice, which did not go over well with Amber.

An insider dished to Life & Style Magazine, “Amber is so unhappy that she told him she needed space. Johnny has been going crazy, calling her every chance that he gets and sending her expensive presents, but Amber has told him to stop. She’s really upset, she has got to decide what she is going to do.” At this stage, it will be a miracle if Johnny Depp and Amber Heard DON’T get a divorce this year. Johnny is still stuck in Australia finishing up the latest installment of the Pirates of Caribbean franchise, so perhaps the time away from each other will give the two some time to iron things out. However, that’s not likely seeing as how Johnny has officially crossed a line and discussed his marriage woes with his former wife Vanessa Paradis.

What do you guys think? Does Amber Heard have a reason to be upset, was Johnny wrong to talk about his marriage with his ex Vanessa? Do you think Johnny Depp and Amber are getting a divorce? Let us know what you think in the comments below!