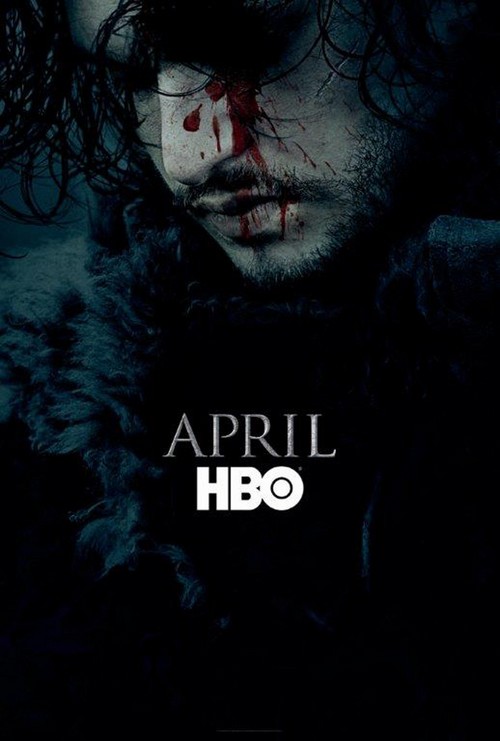 Is Jon Snow alive?! ‘Game Of Thrones’ fans got quite a shock today when HBO released the first official artwork for Season 6 of the wildly popular TV show – and it was a poster of Jon Snow (Kit Harington)!

Snow was slaughtered in the Season 5 finale of ‘Game Of Thrones’ – however it never actually confirmed he was dead, he was last seen lying in the snow unconscious and covered in blood. Who really survives getting stabbed THAT many times though?

Since the Season 5 finale of ‘Game Of Thrones,’ fans refuse to believe that Harington’s character Jon Snow is dead. Despite the fact that Harrington himself has stated that his character was killed off the HBO show.

In a recent interview Harington addressed the rumors that Jon Snow was still alive and stated, “I’ve been told I’m dead. I’m dead. I’m not coming back next season.” Other members of the cast have made similar statements – yet ‘GOT’ fans still refuse to believe it, and are certain that it is all a hoax and the cast was ordered to lie about Snows death to build up the shock factor for the Season 6 premiere.

Today, HBO released the first official promo for the Season 6 premiere of ‘Game Of Thrones’ – which is set to air in April 2016. The poster is a photo of Kit Harrington’s character Jon Snow. Snow appears bloody and beaten, but very much alive!

So, either Harrington and the rest of the ‘GOT’ cast have pulled off the greatest hoax ever. Or, HBO is playing a cruel jokes on fans of ‘Game Of Thrones’ and using Snow’s photo in the Season 6 artwork and implying that he is alive to create some buzz for the all new season.

What do you think ‘GOT’ fans? Is Jon Snow really alive? Was Kit Harington lying about not filming Season 6? Let us know what you think in the comments below!