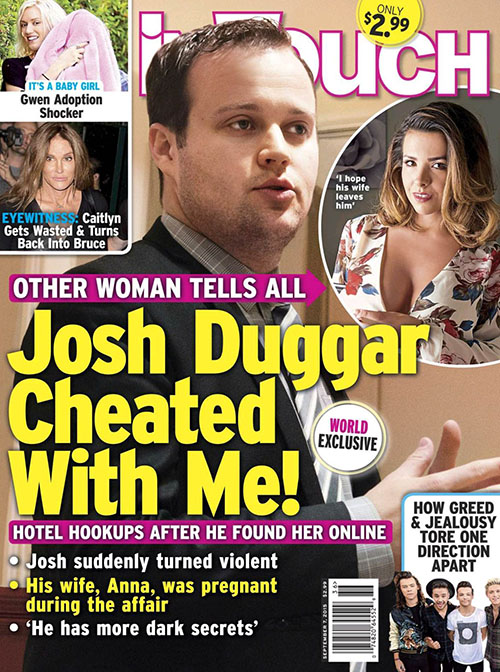 Josh Duggar is still under fire for the shocking molestation of his sisters when he was a teen, and now he is caught up in a messy cheating scandal. The Ashley Madison hacking scandal has created turmoil for many marriages, including Josh and Anna Duggar’s. It was recently revealed that Josh was cruising around the dating website searching for a woman to cheat on his wife with. And one of those women has come forward, and is telling all to In Touch Magazine.

28-year-old Danica Dillon informed In Touch Magazine that the confessed sex addict Josh Duggar approached her online, and they met up at a hotel room to have sex. According to Danica, “Josh did not use protection, and gave her thousands of dollars after the encounters, which occurred when Anna was pregnant with their fourth child (in March or April of 2015).

Danica dished about how violent Josh was while they were having sex and told the tabloid, “He was manhandling me, basically tossing me around like a rag doll. It was very traumatic, I have had rough sex before but that was terrifying.” Danica went on to reveal that Josh Duggar was obsessed with her, he had saw her photos on Ashley Madison, been following her under a fake name on Facebook, and arrived at the club where she was stripping in Philadelphia to make his move – she had no idea he was a reality TV star when she met him.

After the first hotel hook-up, Josh Duggar came back for more and took her to another hotel a month later – he paid her $1,500 to have sex with him. Danica insists that she had no idea Josh was married, of that he had four kids at the time. She dished to In Touch Magazine, “I actually really hope that his wife leaves him and takes his kids away from him and leaves him a lonely and bitter man. I don’t think he deserves happiness. I believe that he has some really dark, deep hidden secrets that he needs to seek help for.”

Seriously, could things get any worse for the Duggar Family? And, what about Josh’s poof wife Anna – is she going to go against their religion and divorce him? Let us know what you think in the comments below!