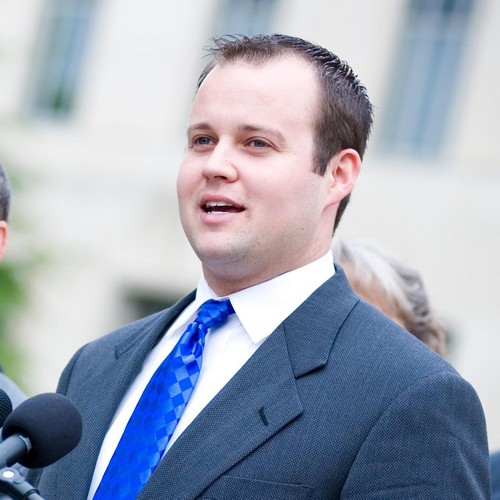 A new report from GLOBE claims TLC’s 19 Kids And Counting star Josh Duggar’s family and friends fear the accused child molester might be in danger and possibly suicidal as a result of the shocking sex scandal he is caught up in. In May a disturbing police report surfaced revealing that when Josh Duggar was 14 years old he molested four of his own sisters, who also star on 19 Kids And Counting. And, to make matters worse his own parents Jim Bob and Michelle Duggar allegedly tried to cover up the crimes, and convinced the victims that it was no big deal.

Since Josh Duggar’s sex scandal went public, TLC pulled 19 Kids And Counting from their line-up. Jim Bob, Michelle, and two of Josh’s sisters tried to set the record straight and insisted that Josh wasn’t a child molester, he was “just curious” when he was a teenage boy. The Duggar’s interview wound up hurting Josh’s case more than helping it.

According to a new report from GLOBE Magazine, Josh’s family and pals fear that the former reality TV star is contemplating committing suicide. An insider dished to GLOBE, “Josh has seen his world and his family’s world crumble, and he knows that it is all his fault. He can never rebound from this, he is hiding himself away, leaving his loved ones fearing the worst for him. The longer he stays isolated, the more depressed he gets – and that has his loved ones terrified for him.” Another insider admitted, “We fear that the shame is too much and he will do something drastic.”

Not only has Josh lost his six figure job in Washington and had to move his family back to Arkansas, but they no longer have any income from TLC coming in, and no Christian events are interested in booking them for appearances. On top of Josh’s money woes, he has to deal with the fact that the entire world knows that he molested his own sisters. And, some of Josh’s siblings are turning on him because they are furious that the TLC gravy train has ended and they might have to find real jobs.

Have you been following the Duggar Family sex scandal? Do you think that Josh Duggar will come out of this okay? Let us know what you think in the comments below!