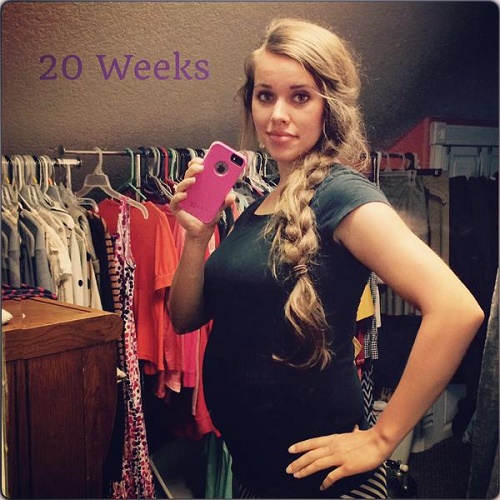 Josh Duggar and the Duggar family have been battling an explosive molestation scandal that has forced TLC to halt 19 Kids and Counting after a police report detailing Josh’s molestation of four of his sisters and a babysitter was revealed. A new bizarre lawsuit reheats the scandal and claims Duggar molested more women, but Jessa Duggar appears to be trying to divert attention with her new baby bump and sonogram photos.

An inmate in Texas filed a writ of habeas corpus complaint against Josh Duggar. The inmate claimed, “I am illegally incarcerated for a sex crime of a minor. I didn’t do it. Defendant Josh Duggar is responsible, and set me up. I spent five years incarcerated for a crime Josh Duggar did.” The convicted felon goes on to say, “Josh Duggar is a pedophile, not me. He planted my fingerprints on my victim.” His statement becomes increasingly crazy, beginning with his assertion, “I have Josh Duggar’s DNA saved on underwear.”

The inmate furthers the level of pure crazy with claims Josh Duggar works for Warren Jeffs, knows what happened to Jon Benet Ramsey, and tossed Baby Jessica in his well. The case was tossed out, but the Duggar family is continuing to struggle with the molestation scandal. A media outlet published Josh Duggar’s molestation police report, and the Duggars went into damage control by claiming the victims wanted the reports sealed. It turned out four of those victims were Josh’s sisters.

Since the Duggar’s dark secrets were revealed, the family has rallied around Josh, going to great lengths at trying to protect Josh and excuse his behavior. Jim Bob, Michelle, Jessa, and Jill spoke out during an interview that tried to downplay the situation, claiming the victims were molested in their sleep, so “it was like they weren’t aware of what was happening.” Jim Bob then reasoned that others in his religious circle had experienced “similar things” before Jill added that her molestation was “mild” compared to other cases. The interview was dubbed “disastrous” and it certainly seems it was.

During the melee of the molestation scandal, TLC has went with a “no comment strategy” that has upset many. The networked pulled 19 Kids and Counting from the air, but hasn’t officially canceled the series. Advertisers like General Mills and Walgreens followed by pulling ads from spots. Questions remain as to why TLC is sitting on the scandal. It might be because the show has been a frontrunner for the network since 2008, and the last wedding episode brought the network’s highest rating in nearly four years. In fact, since the scandal broke, TLC’s ratings have gone up.

Josh Duggar may have lost his job and moved his family back home to Arkansas, but it appears the network is benefiting from the Duggar molestation scandal. The family continues to stand behind Josh, and remained quiet for a brief period. But Jessa just shared apregnancy milestone picture via social networking, along with a sonogram video with a soundtrack of ‘World Traveler’ by Andrew Peterson.

Is Jessa trying to divert the attention from the molestation scandal with her baby pics? Should TLC officially cancel 19 Kids and Counting or will they just ride out the media frenzy? Let us know what you think in the comment section.

#BabySeewald is growing fast! Already practicing swallowing, sucking a thumb, and actively moving arms and legs! 💞 So excited at the feeling of these first baby kicks! 😍 #UltrasoundVideo #20Weeks –with @ben_seewald "For you formed my inward parts; you knitted me together in my mother's womb. I praise you, for I am fearfully and wonderfully made. Wonderful are your works; my soul knows it very well. My frame was not hidden from you, when I was being made in secret, intricately woven in the depths of the earth. Your eyes saw my unformed substance; in your book were written, every one of them, the days that were formed for me, when as yet there was none of them. How precious to me are your thoughts, O God! How vast is the sum of them! If I would count them, they are more than the sand. I awake, and I am still with you." – Psalm 139:13-18