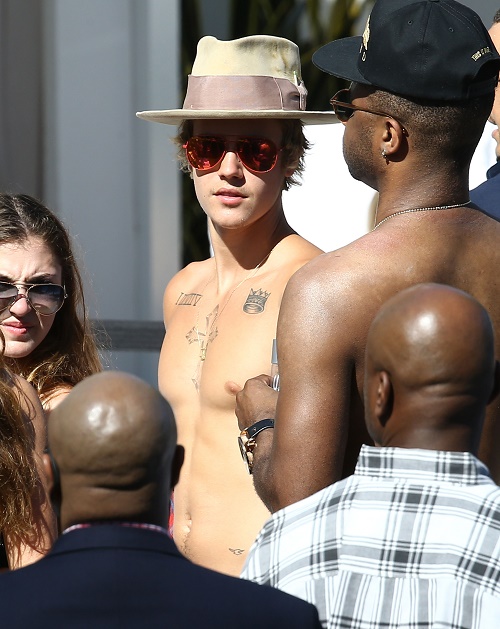 Justin Bieber and Selena Gomez may be over (for now), but Justin has his hands full with Hailey Baldwin and his late night hook-up pal Yovanna Ventura. Biebs and Hailey Baldwin have been dating off and on for months now and are practically inseparable – but Hailey keeps shooting down rumors that they are together, and refuses to commit to Justin. Some say it is just because she is using him to boost her own celebrity status, and others believe that Hailey wants to be with Justin but is afraid that he will cheat on her like he did Selena Gomez. Enter Yovanna Ventura. A beautiful care-free girl who just likes to have a good time, no strings attached.

Hailey Baldwin and Yovanna Ventura both attended Justin Bieber’s 21st birthday celebration on a private island in the Caribbean on March 1st, and describing the week long party extravaganza as awkward would be putting it mildly. Everyone was baffled when they realized that Justin invited both Yovanna and Hailey – and the tension was so thick it could be sliced with a knife.

So why would Justin invite his old fling Yovanna to a week long getaway with his rumored girlfriend Hailey? Well, according to our insiders close to Justin’s circle, Hailey and Justin got in a fight right before his trip and he had no idea that Hailey was still coming. Sources revealed, “Right before Justin’s birthday Hailey announced…again…that she was not dating Justin. He was sick of it, he had been trying so hard to win her over and he has been on her best behavior and it was like she was embarrassed to admit she was dating him. They had a major blow up and Justin thought Hailey wasn’t coming to his birthday, so he invited Yovanna and her friends.”

Bieber is a total tool – but we’re going to have to side with him on this one. Hailey Baldwin refuses to admit she is dating him, and constantly is shutting down rumors on social media and insisting they are “just friends.” So how can she really get mad at him for inviting other girls to his birthday party? And getting mad is exactly what Hailey did – she checked out three days early and flew back home in a huff. According to insiders, Hailey still hasn’t spoken to Justin since he returned from his birthday trip – and she has been freezing out the Biebs.

Do you think that Hailey has a right to be upset about Justin and Yovanna? Which girl would you like to see Justin with? Should he stick with happy go-luck Yovanna? Or make things right with Hailey? Let us know what you think in the comments below!