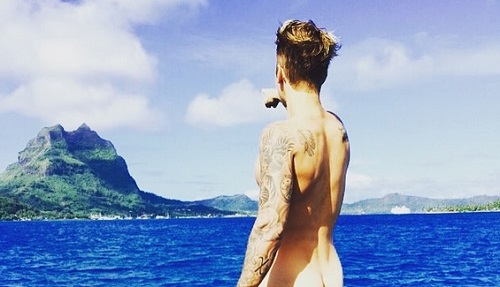 Justin Bieber’s latest nude picture is breaking the internet as we speak. No, that wasn’t an earthquake – it was just the sound of millions of teenaged girls around the world simultaneously fainting after Justin Bieber’s latest Instagram post. Biebs shared a completely naked picture of his butt on social media as he stands in Bora Bora and points at the bright blue ocean. Justin cleverly captioned the photo, “Look.” I think we can all agree that no one is looking at the ocean. See the full pic here.

Justin Bieber sure picked a curious time to post his naked pic on Instagram. Just last week the internet went nuts with rumors that Justin’s ex-girlfriend Selena Gomez was dating his BFF Cody Simpson. Although Cody and Selena won’t confirm they are dating, neither of them have really denied it either. It’s no secret that Justin Bieber wants Selena Gomez back; his music video for “Where Are You Now” just made its worldwide debut, and in the video the words “where are you now Selena” can be seen as clear as day.

So, could Justin Bieber’s naked butt picture just be his way of reminding Selena Gomez of what she is missing out on? Did he just steal a page out of her playbook? Every time Justin hooked up with a new girl, Selena would take to social media and share super sexy and nearly nude photos of herself to get Justin’s attention. Could Biebs be doing the same thing? You have to admit, it is a little strange that Justin decided to post nude online just a few days after Selena Gomez reportedly moved on with Cody Simpson.

Regardless of why Justin Bieber posted the picture, no one seems to be complaining. As a matter of fact, by the end of today it will most likely steal Kendall Jenner’s Instagram crown and be the most liked photograph on the internet. Do you think that Justin’s picture was a message to Selena? Share your thoughts and theories in the comments below!