Justin Bieber Storms Off Stage During Oslo Show: Freaks Out On Fans Who Beg Biebs To Come Back and Finish Singing 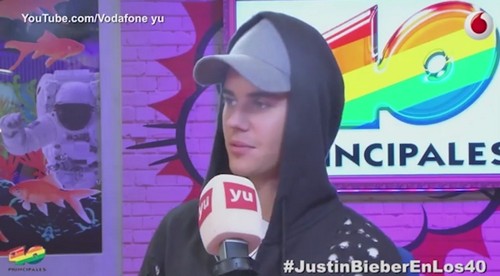 Justin Bieber had a major meltdown on Thursday October 29 in Oslo at a TV performance. Apparently, Justin does NOT tolerate his hormonal teenage fans disobeying his direct orders. It all started when Biebs took the stage – to a screaming mob of fans in the audience.

Justin tried to mop up something that had been spilled on the stage with a shirt or a rag, but while he was cleaning the girls in the audience kept interfering and grabbing his leg – it didn’t go over well.

In TMZ’s video of the episode, Justin shouted at his fans through his microphone, “Yo! What are you doing? Stop it! Come on, I said stop it! Guys, yo, listen to me! I am trying to wipe the floor, give me a second.” The hysterical girls weren’t listening, so Justin said “Nevermind I’m not doing the show,” and stomped off the stage.

You can hear the girls crying in the background as Biebs exits. According to TMZ, the audience is still at Oslo – and singing Justin’s songs at the top of their lungs, hoping it will inspire him to come back out on stage.

Ironically – this is Justin’s second meltdown in 24 hours. Justin actually stomped out of an interview on Wednesday because he didn’t like where it was going. After wards, Justin apologized on Twitter and said that he was trying to “work on getting better at responding not reacting.” Apparently, he hasn’t gotten much better at it – ask the angry mob of fans in Oslo.

It seems like Justin Bieber is just as big of a brat as he ever was, he just has gotten better about hiding it and spinning positive press. Although, in Bieb’s defense – we’re not sure how long we would have been able to put up with those hysterical screaming teenage girls either.