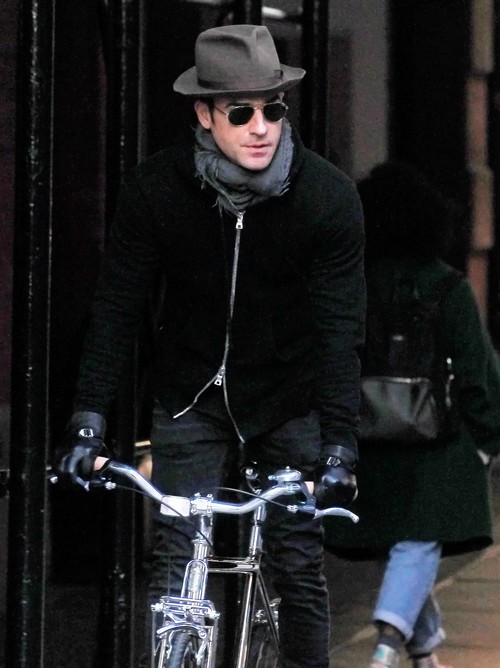 Jennifer Aniston and Justin Theroux were married on August 5 at their Bel Air home in a secret wedding that their guests didn’t even know they were attending until they arrived. After the wedding, Justin and Jennifer headed off to Bora Bora with some of their closest friends to celebrate the surprise nuptials.

After returning from the trip, Justin Theroux and Jennifer Aniston have been unusually quiet about what went on during their exotic vacation at the Four Seasons in Bora Bora. On the Friday broadcast of “Live! With Kelly and Michael,” Theroux did speak briefly about a terrifying experience while snorkeling with Jennifer. Justin described one snorkeling trip with Jennifer Aniston and a French speaking instructor who didn’t seem to connect with the “Leftovers” actor.

Justin said he didn’t realize how low his oxygen tank was and when he tried to signal the instructor to let him know, the guy didn’t really seem too concerned about the lack of air. “I swim over and start tapping on the thing and showing it too him,” Theroux detailed. “He’s just like keep swimming, keep swimming.”

Theroux said as he continued the dive, he became more and more upset over the oxygen situation which naturally caused him to panic. When the instructor finally did come over to help, he passed Justin the emergency respirator from his own tank. When Theroux sucked in what he thought would be air, he inhaled a big gulp of water instead.

That’s when Justin Theroux said he thought he might die on his honeymoon and even suggested that it might have been a conspiracy. The whole revelation about a near-drowning experience during Justin and Jennifer’s honeymoon trip seems really odd and honestly it was awkward to listen to knowing that one of the guests for the honeymoon vacation actually did die by drowning just days after Theroux and Aniston left the island to head back home.

Currently there is an investigation into the death of Carmel Musgrove, who was found dead after what authorities believe was a deadly mix of drugs, alcohol and a late night swim. Musgrove was the assistant to Joel Silver and just one of many prominent guests at the Bora Bora honeymoon celebration.

The revelation that Carmel Musgrove was taking illegal drugs prior to drowning cast a shadow on the honeymoon and even has caused an investigation into the private affairs of Aniston and Theroux. It’s understandable why Justin wouldn’t want to talk about the drowning of Carmel Musgrove just days after he left the island but it was just kind of heartless to even discuss his own obviously not fatal experience during a group scuba diving trip.

It’s almost like Justin told that scuba story on purpose to that his near drowning experience will push the unwanted attention of the Musgrove investigation further down in the headlines and the search engines. Theroux has been very concerned that he and Aniston don’t get exposed for the alleged hard partying that took place during their honeymoon.