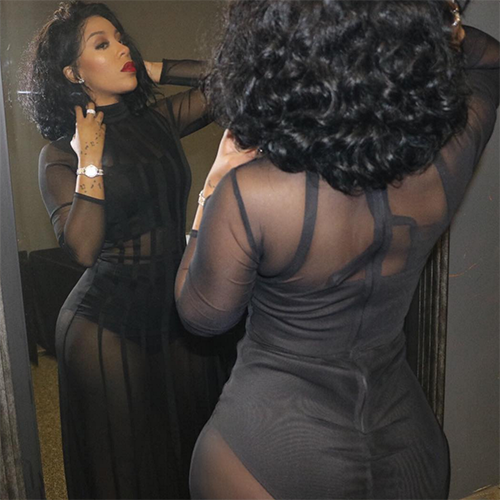 K. Michelle made good on her promise and debuted a smaller booty on Instagram. The singer announced that Betsy was smaller but she still had work to do. K also excited fans when she announced her return to Love & Hip Hop Atlanta for season 5. It looks like K. Michelle has a big year ahead,

Back in November, K. Michelle sat down with B. Scott where the reality star talked about having her butt implants removed. K. Michelle explained that she had just outgrown the implants and was ready to get back to her real shape. K. kept her word and recently debuted her newly shaped backside and she does look great (and a lot more natural.) On one of the photos, K. Michelle captioned, “Betsy is smaller, but she still makes a statement. Sometimes less is more. Not finished yet, but feeling liberated getting back to myself.”

It seems that K. Michelle is getting back to her roots on reality TV too. The Jasmine Brand posted a video of one of her recent concerts and it looks like we get to see the feisty reality star on the next season of Love & Hip Hop Atlanta. During a recent concert, K. Michelle was filmed telling the crowd that she’ll be back for the next season of LHHATL because she has “some unfinished business.” She was an original cast member before heading to the original Love & Hip Hop in New York City and ultimately the spinoff K. Michelle: My Life, which debuts season 2 on January 25.

Apparently, the new and improved K. Michelle doesn’t mean she plans to make up with anyone. Before heading to New York, K. Michelle cut off a lot of friendships, including formerly close friends Mimi Faust and Rasheeda Frost. Instead, she was seen hanging around with the notoriously bad Joseline Hernandez. It seems that if K. Michelle comes back for another round of Love & Hip Hop Atlanta, there will be a lot of drama. Then again, K. has an album dropping in March so a little bit of VH1 drama might be exactly what she needs to sell some records.

Now that K. Michelle has shrunken her formerly inflated assets and headed back to the show that made her famous, can we expect to see a lot more of the Love & Hip Hop Atlanta star in the coming year?