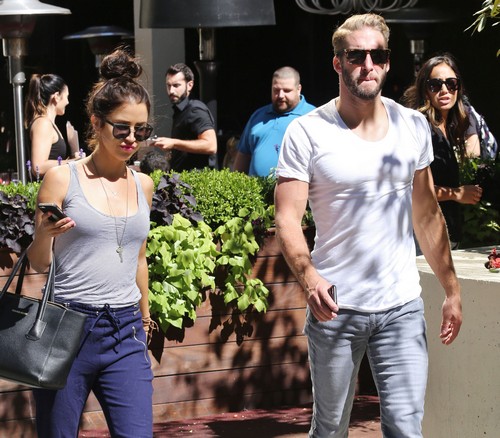 The Bachelorette Kaitlyn Bristowe and her 2015 winner Shawn Booth insist that they are in love and will be getting married in an over-the-top Bachelor Nation style wedding. But, what the couple neglects to say is that they will profit somewhere around $1 Million if they get married on national television like Sean and Catherine Lowe did last year. Who wouldn’t get married for $1 Million? Of course they are determined to keep their relationship going – you would have to be a fool to not cash in on that payday.

This week’s edition of Life & Style Magazine reveals that Kaitlyn Bristowe and Shawn Booth have been raking in hundreds of thousands of dollars since the Season 11 finale of The Bachelorette. Branding Expert David Johnson dished to Life & Style Magazine, “Together they’re worth $3 Million. For each product they are Instagramming and Tweeting, they could net $15,000 per cost. They could fetch up to $500,000 each. They could easily pocket $1 Million from the network for the wedding alone.”

Shawn Booth and Kaitlyn Bristowe have gushed in interviews that their relationship is the real deal – but CDL has had doubts from the beginning. The fact that the two reality stars are spending more time pimping out products on social media that they are putting in to planning their wedding or even setting a date speaks volumes. If, and that’s a big if, Kaitlyn and Shawn do make it down the aisle and get married – it is obvious that money will be the motivation, not because they are madly in love with each other.

Have you been following Shawn and Kaitlyn since the final of The Bachelorette? Do you think that they will get married? Are they in love with each other, or just in love with the paychecks that are rolling in? Let us know what you think in the comments below!