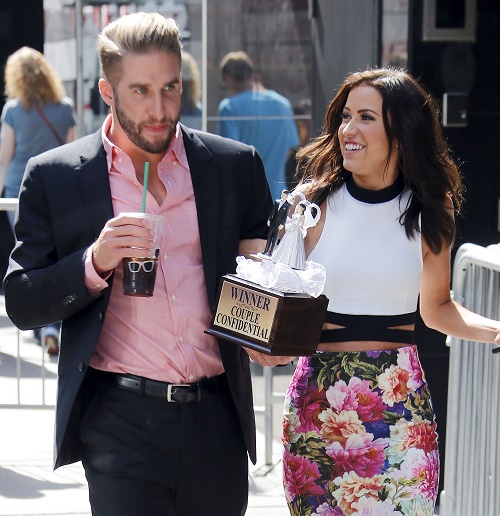 Bachelorette Kaitlyn Bristowe’s fiancé and 2015 winner Shawn Booth has basically been professing his love for her since the Season 11 premiere. He ever revealed on the ABC show that he fell in love with Kaitlyn when she was on Chris Soules’s season of The Bachelor, and he joined The Bachelorette solely to meet Kaitlyn and ask her to marry him. But, according to a new report, Shawn’s tale of true love has been slightly exaggerated, and he was just blowing up his ex-girlfriend’s phone last month!

This week’s edition of OK! Magazine reveals that Shawn has been calling and texting his ex-girlfriend excessively, even though she has been ignoring him. Shawn and his ex were together for 6 years, and at one point they were actually planning a wedding and he bought a house for her – but they never made it down the aisle.

A source close to Shawn Booth’s ex-girlfriend dished to OK! Magazine, “Since they officially ended their relationship in the summer of 2012 Shawn has tried his best to get her back but he has had no luck. Their plan was to get married but they couldn’t agree on a living situation and were forced to break up.” The source goes on to reveal that Shawn called his ex-girlfriend on July 11 multiple times, and even sent her a text message saying he was “technically engaged” but still wanted to speak to her.

Technically engaged? What does that even mean? It sounds to us like he was just warning his former flame that the engagement was a technicality and that she shouldn’t get upset when she saw it air on The Bachelorette on national television. This just proves what we have all suspected all along, the engagement was just for ratings. Do you think that Kaitlyn Bristowe knows Shawn is still in love with his ex? How would she react if she learned he was still texting and calling his former flame? Let us know what you think in the comments below!