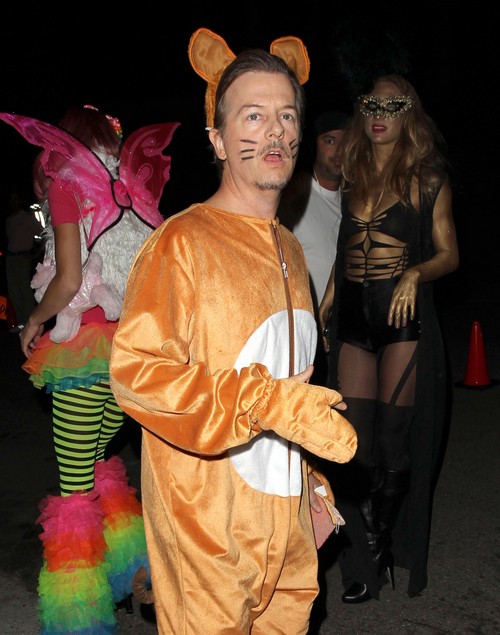 Kaley Cuoco was seen out with David Spade recently and some think the “Big Bang Theory” star is dating her former co-star to help stop the rumors that Kaley is back together with Johnny Galecki.

Kaley was seen out on Sunday, November 15 with David Spade at a benefit concert where Ed Sheeran was performing and they were looking pretty chummy. Guess who wasn’t there? Johnny Galecki. Instead, he posted a photo of himself and some other woman to Instagram around the time that Cuoco was out with Spade.

For those who may not remember, Kaley Cuoco starred with David Spade in a comedy series called “8 Simple Rules” when Spade joined the series back in 2004. Kaley and David have remained close even after the ABC comedy was canceled the following year. The cast of the show have posted photos of their reunions and seem to get together pretty regularly.

Maybe that’s why Kaley Cuoco was more than happy to hook up with David Spade on Sunday night. Spade was a special guest at the Ed Sheeran concert and had been promoting the show while asking for donations since the whole gig was for charity.

Kaley Cuoco was at the event and as usual, she brought her sister Bri along for support. At the Ed Sheeran performance, Kaley coupled up with David Spade. Kaley Cuoco and David Spade looked pretty comfortable in their embrace, leading some to think that something romantic is going on between the former co-stars.

Cuoco has proved that she doesn’t stay single long and with her recent divorce news, it’s about time for Kaley to couple up with someone. Kaley Cuoco and Johnny Galecki have been denying that they are back together even though there is plenty of proof to the contrary.

Now we’re left to wonder if Kaley and David Spade are a thing or if the “Big Bang Theory” actress is just trying to throw us off her trail.

It’s pretty obvious that Kaley Cuoco and David Spade are friends and are just staging their embrace as some sort of damage control. When Kaley takes pictures with Johnny Galecki, the chemistry between them is obvious.

Kaley Cuoco and Johnny Galecki can deny their attraction all they want but it’s clear that something is up between them no matter how much Kaley tries to throw everyone off by getting close to other co-stars like David Spade.