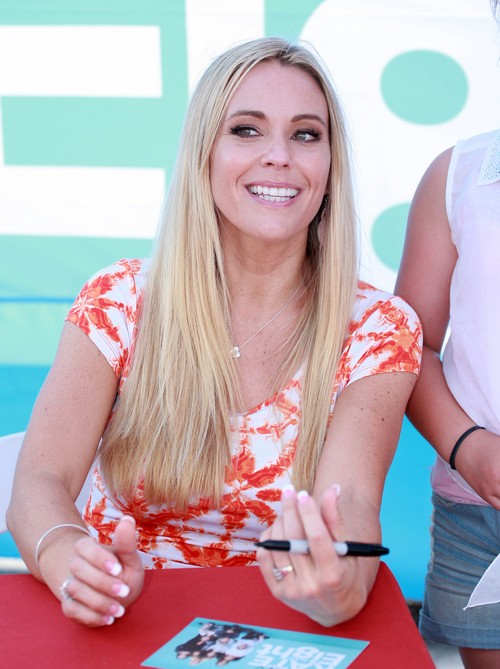 Jon Gosselin will be happy to know that he never has to worry about Kate Gosselin coming back into his life. Apparently, the controversial reality star Kate Gosselin was spotted at a party in Philadelphia this weekend, hosted by TLC, and Kate was sporting a huge smile on her face while showing off a flashy ring on her left ring finger. Is Kate Gosselin engaged?

Kate Gosselin appeared at the TLC block party in Philadelphia for an autograph signing, but the reality star looked unusually happy despite the constant rumors and ongoing custody battle between her and her ex-husband Jon Gosselin.

Radar recently revealed that Michelle Jones is alleging that during their divorce, Prescott made no effort to visit the couple’s three children, Ashley, Brooke, and Connor. In the documents, Michelle states, “he has had Connor two times overnight. He has not taken the girls at all overnight.”

It sounds like Kate Gosselin and Jeff Prescott are the perfect match for one another, especially considering both of them have been accused of having horrible parenting methods in the past.

We wonder what Jon thinks about the possible engagement. If we were him, we would be happy to have her out of our lives completely, unfortunately that does not seem to be the case for Jon, as he will continue to fight for custody of his children with Kate.

So what do you think? Is Kate Gosselin secretly engaged to Jeff Prescott, or did she choose to wear the ring for the sole purpose of publicity? Let us know in the comments below.

TLC Block Party at the Great Plaza at Penn’s Landing in Philadelphia, Pennsylvania on May 30, 2015. FameFlynet