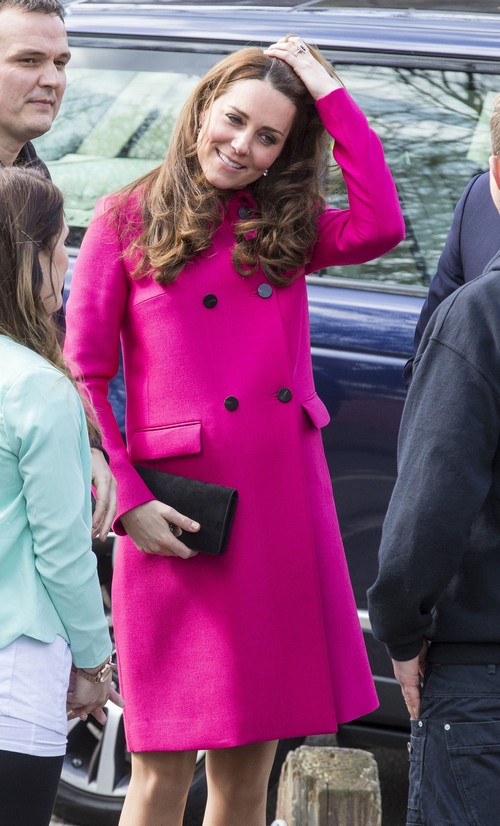 Kate Middleton has had a baby girl room designed for the nursery in Anmer Hall. As the Duchess of Cambridge is finally getting some rest on maternity leave, the royal couple are putting the final touches on their second child’s room. However, this simple chore might have accidentally revealed the gender and official due date for The Duchess of Cambridge’s second royal baby.

An order for pink and purple paint was placed with interior design company, Annie Sloan. According to the Daily Mail, three different shades of girly colors were brought to the royal couple’s home, Anmer hall. The company confirmed the paint colors: Henrietta – a lilac hue, Antoinette- a pale pink with a touch of brown, and Emile – a soft aubergine spiked with pink tones. All colors are staple baby girl colors.

What is even more revealing is the date the project must be complete by, April 25, 2015. Could this be Kate Middleton’s official due date? Kensington Palace refuses to comment on the gender of the second royal baby and a rep for Annie Sloan stated they “cannot confirm or deny” the company had supplied paints to Anmer Hall or the royal couple.
Could the paint order be for another room in Prince William and Kate Middleton’s 10-bedroom home? Possibly, but everyone has been betting on Kate Middleton giving birth to a baby girl for weeks. Bookies are placing odds on a princess with 4-5 odds and 11-10 for a boy.

Kate Middleton and Prince William have claimed they do not know the gender of their second child. Rumors would suggest otherwise. The Duchess was spotted buying baby girl clothes as Celeb Dirty Laundry reported during our coverage of Kate’s last scheduled public appearances. Others like to rely on old wives tales and point to her features being different during Middleton’s second pregnancy.

A prince or princess will make the royal couple happy, but a baby girl would definitely appease Prince William. During Kate’s first pregnancy, the Duchess reportedly told a guardsman at the Mons Barracks St. Patrick’s Day festivities she would like to have a boy, but William was hoping for a girl. As we all know, Kate Middleton had her wish of a son, and gave birth to Prince George.

The second royal baby’s name seems to be causing a huge issue. We mentioned this problem a few days ago, but as Kate Middleton’s due date draws near, the feud over the name of the royal baby is becoming a hot topic. According to rumors, Kate wants to name her daughter after her mother, Carole Middleton. However, Carole is a lowly commoner in the eyes of Queen Elizabeth and Camilla Parker-Bowles.

The royal baby’s name might be causing trouble in the palace, but bookies are confident in the name Alice. Charlotte and Elizabeth are also strong contenders in the odds. If all the hints at the gender of the royal baby being a girl are wrong, and Kate Middleton gives birth to a boy, the top bet for the prince’s name is Arthur.

What name would you place money on? Alice seems the best bet, but I wouldn’t rule out Charlotte. The royal baby being named Elizabeth seems like a long shot, but Queen Elizabeth might get her way!