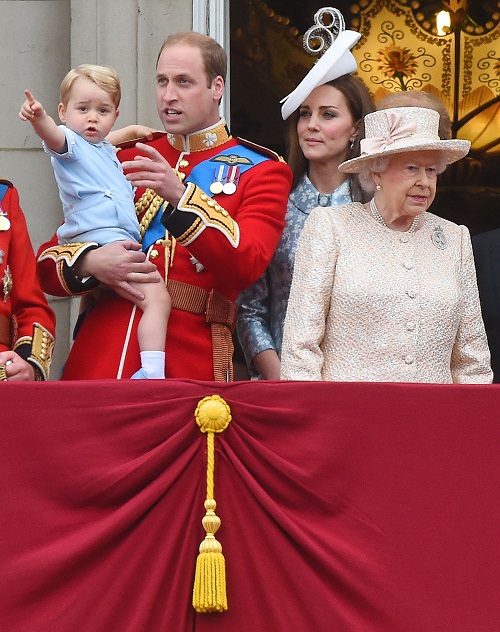 Kate Middleton was planning on taking a longer maternity leave after giving birth to Princess Charlotte Elizabeth Diana, but Queen Elizabeth had other plans. The Queen’s demands didn’t stop the Duchess of Cambridge from continuing her royal revolution that focuses on family. Kate brought Prince George to her first official public appearance and debuted an amazing post-baby body after just 6 weeks of giving birth to Princess Charlotte.

Prince William and Kate Middleton brought Prince George to Queen Elizabeth’s celebration, the Trooping the Colour birthday parade. The nearly two-year-old tot stole the show and waved from the balcony of Buckingham Palace. When the news broke Kate was ending her maternity leave early, most likely under pressure from the Queen, Prince George was not mentioned in Kensington Palace’s statements. George accompanied his mother and father, stealing the focus with his adorable head of blond hair and thrilled smiles as he looked out the windows of the palace.

More surprising, Prince George and Kate made a second debut at the Festival of Polo charity tournament. Kate Middleton chased George around the match, walked around the lawn with Kate close behind, and laughed off a tumble he took down a small hill. No nannies were seen intervening or helping the Duchess who took care of Prince George solo.

It appears Queen Elizabeth may have won the maternity leave battle, but Kate is continuing to break royal tradition by raising her children with a strong focus on family. Most royals leave the job to a staff of nannies while they enjoy tea. Princess Charlotte was not in attendance to either of the events this past weekend, but it’s a safe bet she was with grandmother, Carole Middleton, at Anmer Hall. Kate and Carole have long instituted family caring for the children, instead of nannies. For nearly 3 months after Prince George was born, Prince William and Kate raised him without the help of a nanny.

The Duchess also turned heads with her post-baby body. Kate managed to reveal another svelte and lean façade just six weeks after giving birth to Princess Charlotte. When Kate was entertaining the idea of a longer maternity leave, rumors sparked the Duchess was entertaining the idea of tummy tuck. However, most insiders insist Kate Middleton sticks to a strict diet and gets plenty of exercise by taking walks and playing with Prince George.

What do you think of Kate Middleton bringing Prince George to her official public appearances? Does Kate’s insistence she spend more time with her family irk the Queen? Royal insiders claim Queen Elizabeth was happy to have the royal children around, making her feel youthful, but does she appreciate the Duchess undermining her preference for Prince George and Princess Charlotte to be raised with royal values and traditions? Let us know in the comment section below!