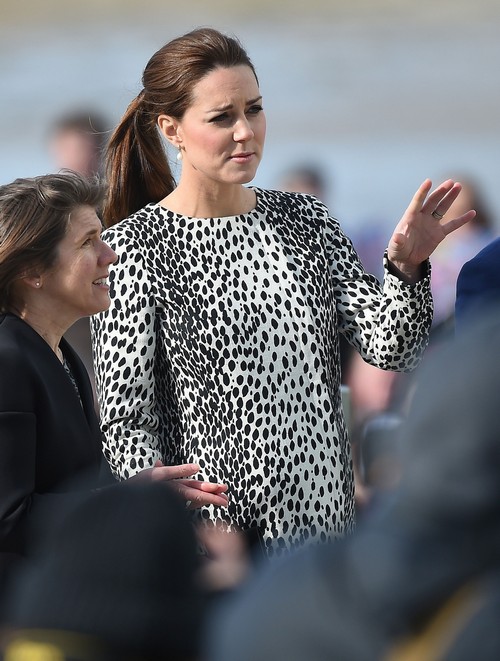 HRH, The Duchess of Cambridge, formerly known as Kate Middleton, or, to some as “Waity Katie” is now known throughout the realm as “Lazy Katie”. The Palace states, “The Duchess of Cambridge, as a senior member of the Royal Family, works in support of The Queen in carrying out Royal duties both at home and abroad.” But, does she, and is Kate Middleton doing enough? Most agree, she is not.

Tim O’Donovan, a retired royal watcher, has famously calculated the official engagements undertaken by the Royal family for the past 36 years. His calculations are well known, respected and appear yearly in the Times of London and Guardian newspapers.

By Donavan’s calculations, 2014 saw Kate Middleton, Duchess of Cambridge attend a total of 91 engagements, 40 in the UK spread out throughout the 365 day calendar year, the others racked up in a short period during an overseas tour. Tours are a way in which royals can amass high numbers of engagement in mere weeks. A short week overseas can account for 3-6 engagements a day.

To contrast Kate’s numbers with the other Royals, in 2014 The Duke of Edinburgh, then aged 93, attended 273 engagements, Queen Elizabeth, attended 393, Prince William, The Duke of Cambridge, and Kate’s husband undertook 143 while also working full time as a SAR military pilot. Charles, Prince of Wales undertook 533 official engagements, and usually averages between 530-600 a year, while, his sister, The Princess Royal, appeared 528 times. The Queen and her husband have averaged between 350 and 500 a year for decades.

In 2013, the year of little Prince George’s birth, Kate managed a meager 44 official engagements. In comparison, Princess Diana, Princess of Wales, aged 22, completed 67 engagements in the year of her first child’s birth and also performed an official solo overseas trip to Monaco to attend Princess Grace’s funeral. In 1983, Diana, then the young mother of six-month-old Prince William began what would amount to 110 official engagements in three countries, six weeks of which were overseas.

Kate, now in her thirties, educated, healthy, and pampered, is seen by many in the United Kingdom as the lazy royal. Her only job, prior to marriage, well, she didn’t really have one. Kate waited for William to marry her, hence, “Waity Katie”. Her present “job” as the wife of a Royal Duke is as a roving ambassadress of sorts. Kate is not allowed views or opinions. Her main duty, besides motherhood, is to accept the duties of Patron or President of various charities and honorary commands of various military regiments associated with her title. Diana was Patron to 100’s of charities, attending meetings, functions, and galas as required. These charities and regiments should take precedence on each Royal’s calendar and do But, per the Palace, to date, Kate hasn’t stepped up, affiliating herself with only eight charities.

The Duchess, like all Royals attend twice yearly round tables with courtiers, administrators, and ladies in waiting to field the Royal calendar. Thousands of invitations are sent to members of the Royal family each year and they are scheduled and accepted at these meetings. Royal tours of foreign and commonwealth counties are mapped out and planned years in advance. Ceremonies such as the opening of Parliament, the Trooping of the Colour, the Order of the Garter Procession, State dinners of visiting dignitaries, and countless others are entered as static dates years before invitations are considered. State weddings and funerals are also covered. There are no last minute additions, the royal firm is a well oiled machine and each event is planned to the most minute detail far in advance.

The Queen herself has had four children and never slowed down, not for pregnancy, war, death or illness. Neither did her father, King George V, or his ancestors before him. Elizabeth, The Queen Mother, was scheduled to appear at an official function the day she died, aged 101. That year, at 101, The Queen Mother officiated at 51 events. Had she lived, the number would have risen. The Queen Mother worked harder at age 101, then Kate works now at age 33.

This is “the job” “Waity Katie waited for, to be a Royal, a princess of the realm, a Royal Duchess. The job ends at death, there is no retirement, vacations are also calendared in as static, or they were before Kate. There is hunting in Scotland, Christmas at Sandringham, summer at Windsor, but throughout all traditional movements of court, the work continues.

Her chosen life is a traditional role written in stone, a role she full well knew began on the day of her engagement, ending at her own state funeral. This is the role she sought, planned for, and readied herself for over 14 years. Why won’t she fulfill it?

Members of the Royal family serve the people of Britain, they work hard, they don’t ever miss an engagement, and they don’t take sick days. Duty first. They arrive on time, perfectly dressed, they study before every engagement, they know the names, the places, the people they will meet, they write and deliver their speeches, plant trees, cut ribbons, speak to pensioners, school children, and veterans who have also dressed for the occasion and waited months, and then hours for the anticipated royal visit. In fact, most organizations wait years for an eventual acceptance to their requests to a member of the royal family. Charities depend on thee royal presence. A royal name on the letterhead or brochure of a charitable gala fundraiser guarantees press, funding, legitimacy, and a successful event. Diana’s charities remain without a figurehead, while Kate hides in the countryside and is photographed shopping, or on endless island vacations.

In 2014, per Donovan, 15 members of Britain’s Royal family undertook over 4,083 official engagements. Of that total, Kate undertook less then 3% of those engagements, actually Kate’s percentage is 2.22. If one adds the average age of the working royals into this factor, the majority of the 15 royals who are currently working are over the age of 65, most over 70, and the current Monarch is 88 this year.

As the Queen’s subjects seethe at Kate’s excesses and refusal to appear on the Court Circular, the conundrum continues, if she wanted the job so badly why does Lazy Katie refuses to step up and earn her keep.