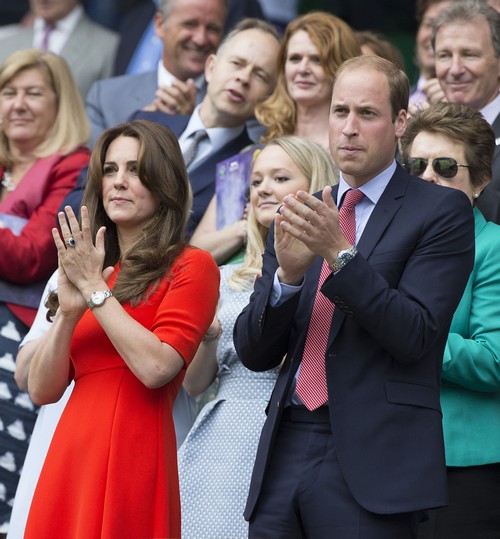 The eerie parallels between Kate Middleton and Princes Diana continue to appear. Kate Middleton’s royal revolution and manipulation of the royal family appears to have come to an end. The entire scheming Middleton family has been removed from the Duchess of Cambridge’s life as Queen Elizabeth finally takes control of the spiraling situation with Kate, Prince William, and the March of the Middletons.

There is no question that changes have been quietly happening behind the public appearances and broad smiles when it comes to the royal couple. Kate and William’s marriage has been a slightly concerning echo of Prince Charles and Princess Diana’s doomed relationship. The Duchess is Prince William’s second choice for a wife. Much like Charles’ undying love for Camilla Parker-Bowles, William had loved and even proposed to Isabella Calthorpe, only to be rejected thanks to Isabella’s distaste of the royal lifestyle.

William dumping Kate to propose to someone else, only to be denied before running back to his ex’s open arms seems like a crappy thing to do, but let’s not forget Kate isn’t as innocent in this as she seems. The now Duchess of Cambridge schemed and plotted to nab Prince William. Kate switched universities and even waited a year to time her attendance at St. Andrews with William’s arrival.

As CDL has covered, the parallels between Kate Middleton and Princess Diana are eerie, but where Diana was naive and virginal – Kate is not. The Duchess of Cambridge also had the support and guidance of her fearless mother, Carole Middleton. The Middleton matriarch helped Kate secure power and even orchestrate a royal revolution that shifted control in Kate’s favor. Carole was constant and unyielding presence in the Duchess’ life, but has seemingly disappeared.

The sightings of Carole and Prince George bonding over trips to the beach and local parks have stopped. In fact, the last time Carole Middleton was spotted with Prince George was his birthday….the birthday Queen Elizabeth sent a clear message to Kate and the Middletons by snubbing the party and sending Prince Phillip in her place.

It now seems the Queen has finally put her foot down and taking control, or retaliating, when it comes to the March of the Middletons. The social-climbing family may be savvy and fearless, but Queen Elizabeth is Queen for a reason. Carole, Michael, Pippa, and James Middleton appear to have banished from running amok in the palace, but more importantly – Carole Middleton is no longer the biggest influence in Prince George – the future King – and Princess Charlotte’s life.

Kate Middleton has gotten what she wanted, marrying Prince William and climbing to social heights that open doors of power, and the royal family has gotten what they want – an heir and spare. It may sound like Kate is more like a brood mare, but no one forced her to into Prince William’s life. Kate and Carole plotted and planned to nab the royal. Now that everyone has gotten what they want from the situation, Kate is now being out-maneuvered by Queen Elizabeth. Essentially, the royals are pulling another Princess Diana on Kate Middleton.

Kate’s reappearance on the staged drive to Crathie Kirk in Scotland for Sunday prayers just showed the Duchess of Cambridge is isolated, depressed, and alone. No amount of bangs can hide the unhappiness of your family being thrown out of your life and realizing the power you thought you had is gone.

The next few weeks will be interesting for royal watchers. You can bet the Middletons won’t go down without a fight. Kate Middleton may be enduring the wrath of Queen Elizabeth, but we shouldn’t underestimate the Middletons. Princess Diana, who was emotionally broken and isolated, eventually rose to be a contender that the royal family didn’t anticipate, and Kate Middleton and her family are even more manipulative and savvier when it comes to navigating the royal life.