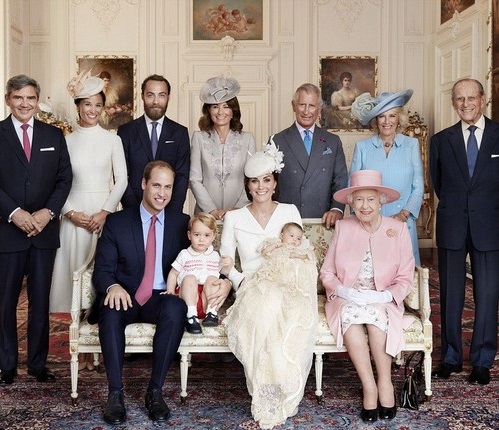 Kate Middleton is an icon that people have gravitated to, winning the hearts of most royal fans. However, the Duchess of Cambridge and her middle-class Middleton family are overstepping Queen Elizabeth’s tolerance. While Carole Middleton is implanting herself as matriarch at Anmer Hall, James and Pippa Middleton’s constant presence upstages the Duchess and the royal family, causing inevitable royal drama.

Following the Middletons overstepping royal traditions after the Princess’ birth, they struck again at Princess Charlotte’s christening. James and Pippa Middleton were front and center, overshadowing Kate’s well-planned event that paid homage to Princess Diana. The Duchess’ subtle touches of Diana; the church where the late mother of William and Harry was christened and Diana’s favorite photographer capturing the images that were shared with the world, were adored by many media outlets. But, as the Daily Mail points out, James and Pippa Middleton were planted firmly in a powerful position behind Prince William and George.

The fact that Kate Middleton’s siblings are even present in both Prince George and Princess Charlotte’s official photos isn’t typical royal protocol. In fact, William and Harry’s official christening photos are quite different. Diana’s family is nowhere to be seen in either set of images. It would stand to reason, that Prince William merely wanted his brother, Prince Harry, to be a part of the images, warranting James and Pippa’s appearance. However, Harry was unable to attend Princess Charlotte’s christening, which would give William a good reason to exclude James and Pippa. Yet, Kate Middleton’s brother and sister were present and positioned in a prime spot, pushing Prince Philip from his rightful position, behind Queen Elizabeth.

Most recently, Pippa and James Middleton showed up in the Royal Box at Wimbledon, which is one the “hottest tickets of the summer season” per Daily Mail. The Royal Box is typically reserved for immediate Royal Family members. Next, the honor goes to those who have made some kind contribution to national life. Of course, you’ll often see famous faces in the box. For example, David Beckham sat behind Pippa and James Middleton during the women’s semi-finals. Yet, Beckham is a global figure who managed to secure a bid to host the 2012 Olympics as the British media outlet points out.

What have Pippa and James Middleton done? Pippa has written a book on entertaining, which has been widely mocked, while dabbling in fashion, running the occasional marathon, and doing an occasional story for random magazines. James Middleton has two failed cake firms that have been struck off the register at Companies House. James has also bemoaned being the brother of the Duchess of Cambridge, telling TYD “Yes, it does get frustrating. I work incredibly hard — just like every other person in business and work and aside from the fact that yes, I am the brother of someone very important, I am, at the end of the day, just James.” Kate’s younger brother went on to admit, “Firstly, I was not confident in the pursuit of me getting my degree and secondly, I already knew that I wanted to work for myself and have my own business. I used the stepping stones within the family business,” James said, revealing how his first venture, The Cake Kit Company, came to be.

Thanks to Kate Middleton’s family-focused influence and Prince William’s status as heir to the throne, the Middleton family has been accepted as “nearly royals,” as the Daily Mail dubs the duo. Where most in-laws are typically shut out, the Middletons are usually front and center. Queen Elizabeth, and even Carole Middleton, must be very aware of the fact James and Pippa are appearing to milk the spotlight, taking advantage of Kate’s position.

Will it only be a matter of time before James and Pippa Middleton are knocked down from their position? Will Carole Middleton shut down Kate’s siblings from abusing her status to save the Middleton’s public image? On the other hand has any Middleton brought shame upon the Royals like Prince Andrew? Let us know what you think in the comment section below.