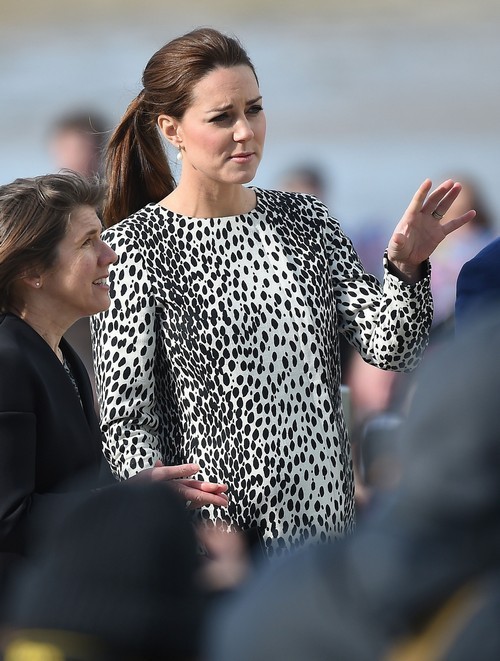 Kate Middleton is pregnant with baby number two, and her due date is less than a month away in April 2015. Prince William’s mother-in-law Carole Middleton has refused to leave her pregnant daughter’s side for weeks now and is adamant that she won’t be phased out of her grandchild’s birth like the royal family attempted to do when Prince George was born.

According to the March 23rd edition of OK! Magazine, “It seems Duchess Kate’s mom Carole has been staying at Kensington Palace to help Kate prepare for Royal Baby 2.0 in April, and she is driving her son-in-law crazy!” A royal family insider dished to OK! Magazine, “Kate’s mom means well, but William could really use a break from the in-laws. Carole has pretty much taken over, she has even been nagging Prince William about cleaning up the dinner dishes.”

No wonder Prince William jetted off to Japan and had no qualms about leaving behind his extremely pregnant wife Kate – it sounds like his “royal tour” was more like a desperate attempt to get away from his nagging mother-in-law. Kate Middleton’s family has often been accused of using Kate’s royal connections to bask in the limelight, so it is no surprise that Carole Middleton is refusing to leave Kensington Palace. There is no way she will miss the fanfare that comes along with another royal baby. We’re just surprised that Queen Elizabeth hasn’t kicked Carole Middleton out of Kensington by now.

Do you think that Prince William is being overdramatic, or has Carole Middleton overstayed her welcome? Is she at Kensington because she truly cares about Kate, or just because she enjoys all the media attention of the royal baby? Let us know what you think in the comments below!