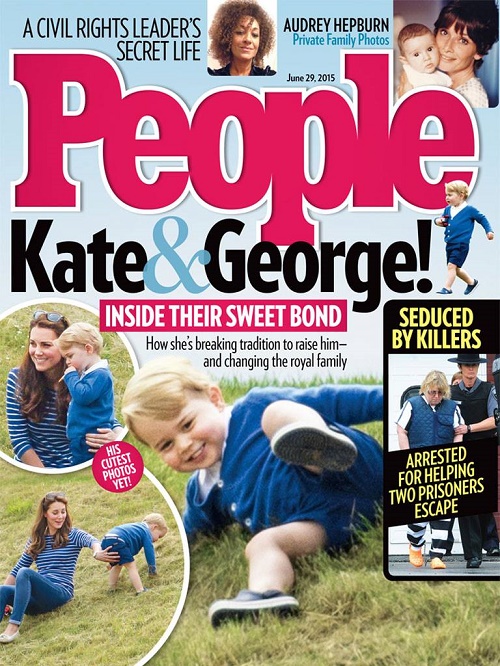 Kate Middleton may be smiling for photos, chasing Prince George around polo matches, and rocking a super slim post-baby body, but rumors the Duchess of Cambridge is silently suffering continue to grow. According to royal insiders, Kate is battling depression and exhaustion, leaving her to turn to Carole Middleton against Queen Elizabeth’s orders.

The Duchess and Prince George are featured on the cover of People looking happy while watching Prince William play in a charity polo match. Kate smiled and looked after little George without the help of a crew of nannies during the game, but veteran royal photographer Mark Stewart noticed how Prince George kept Kate moving saying, “George seemed to be a handful – a live wire.”

Another insider furthered the concern for Kate’s well-being by revealing, “George doesn’t let her have a minute to herself. He’s running around constantly.” A different insider who spoke to Closer claims, “George wants to be involved with everything concerning Charlotte, but he also wants his mom to himself.”

With Kate Middleton’s royal revolution, breaking traditions to raise the children herself with a family focus, it appears she is starting to feel the pressure. A previous report stated that the exhaustion is coupled with some depression. According to other royal sources, Kate is also battling postpartum depression. Despite the exhaustion and rumored depression, Kate continues to make changes and raise the children with middle class values.

Queen Elizabeth isn’t happy about the break in royal protocol, and has made it clear she wants to see Prince George and Princess Charlotte raised with royal values. The entire Middleton middle class revolution angers the Queen, who constantly butts heads with Carole Middleton. However, Carole isn’t backing down. Kate’s mother has allegedly moved out of Anmer Hall, after staying to help the Duchess after she gave birth to Princess Charlotte, but still checks in with her daughter on a regular basis.

“Carole is no longer at Anmer full time, but she is still going back and forth a lot to help Kate out. She wants Kate to have time to herself and she’s been helping plan healthy meals to ensure Kate has the energy to look after two children.”

It appears Kate might be welcoming Carole’s meddling beyond the mother-daughter bond. Prince William is busy, returning to work and pleasing Queen Elizabeth. William has also attended several public appearances and even partied with Chris Hemsworth at the Audi Polo Challenge in May. Is Kate feeling restless and frustrated being left at home to raise Prince George and Princess Charlotte?

What do you think? Is Kate Middleton suffering from baby blues? Are the demands of the royal lifestyle draining the Duchess, leaving her to battle exhaustion and depression? Let us know in the comment section below.