Kate Middleton Pregnant With Twins: Princess Diana Would be ‘Thrilled’ – Baby Boy and Girl Due April 20? 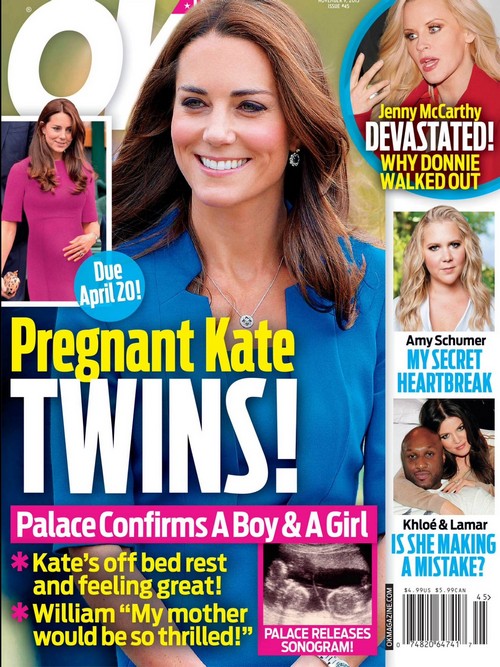 Is Kate Middleton pregnant with twins? A new report says that Buckingham Palace has confirmed that the Duchess of Cambridge is pregnant again only six months after Princess Charlotte’s arrival. This week’s cover of OK! Magazine proclaims that Duchess Kate is off bed rest, her morning sickness has subsided and she is feeling great.

An excited Prince William reportedly said, “My mother would be so thrilled!” Yes, OK! actually reported that Prince William actually said that Princess Diana would be thrilled! Are the palace walls bugged? The twins, a boy and a girl, are due on April 20 the magazine cover insists. But rumors that the Duchess of Cambridge is expecting another baby have been going around since Princess Charlotte was only three-months-old.

While the cover screams that Kate Middleton and Prince William are expecting a boy and a girl the article inside gives conflicting information. A Palace insider says that the royal couple “doesn’t plan to find out what they’re having in advance, instead they want to be surprised at the birth.” Which is it? Are the Duchess and Duke of Cambridge having a boy and a girl or are they waiting to find out the gender of their twins?

It seems that just about every month one magazine or another screams out the news that Kate Middleton is pregnant with another heir to the throne. Considering the fact that Kate Middleton has reluctantly returned to work after a five month maternity leave it’s highly unlikely that the Duke of Cambridge’s 33-year-old wife is pregnant again so soon.

Queen Elizabeth has been keeping her granddaughter-in-law very busy since the end of September with appearances at the Anna Freud Centre and World Mental Health Day at Harrow College. Just in the past week there has been a trip to Dundee, the state dinner honoring Chinese president Xi Jingping and the premiere of the new James Bond movie “Spectre”- and just yesterday – October 27 – the Duchess of Cambridge attended the annual 100 Women in Hedge Funds charity dinner.

Carole Middleton would surely be over-the-top thrilled if her daughter were pregnant with the fifth and sixth-in-line to the throne! Reportedly the manipulative Mrs. Middleton was about to burst she was so happy with the news that two more royal babies will part of the Middleton family.

But we’re certain that the Duchess and Duke of Cambridge aren’t pregnant with a baby, let alone twins. What kind of gives it away is the total lack of any mention of this mystery twin pregnancy on any of the Royal Twitter accounts. If Buckingham Palace made an announcement it would be on the Internet, no?