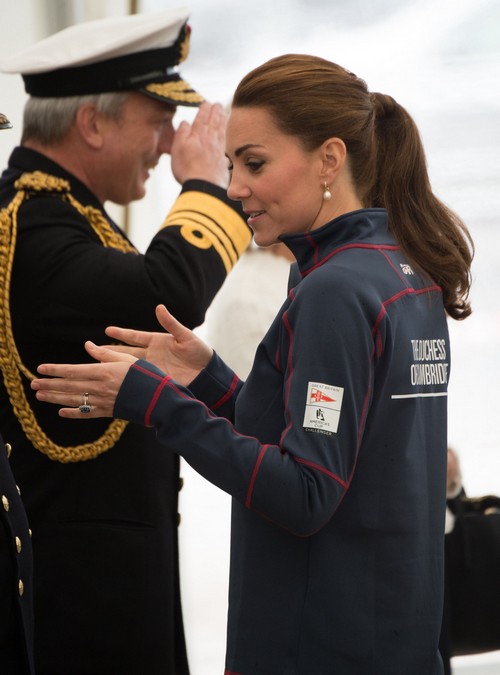 Kate Middleton has finally reappeared in public with bangs after taking a 4 month maternity leave clearly trying to hide her stress and depression. Princess Kate’s reappearance in Scotland raised eyebrows as the normally flawless and always in control Kate looked tired, glassy-eyed, and forcing a smile. Could the monarchy be behind Kate’s appearance, perhaps ending the March of the Middletons by having Carole Middleton banned from the Duchess’ life?

Kate Middleton’s attempt to hide her unhappiness with a new fringe failed as the new hairstyle sparked speculation that the Duchess is trying to hide stress and wrinkles with the “Botox Fringe.” Media outlets like the Independent theorized Kate’s bangs are a way to look younger without going under the knife or needle.

However, the Duchess of Cambridge’s normally bouncy blowout was flat and dull. Her eyes were glassy and buggy as Prince William drove Kate to Crathie Kirk in Scotland for church. The Duchess also had bags under her eyes but forced a wide, public-pleasing smile as she drove by with Prince William smirking from behind the wheel of their Range Rover. It’s all very odd, as Kate Middleton has access to Hollywood-levels of plastic surgery and beauty tools, but used a haircut to try and hide her appearance.

It’s no secret Kate and William have been having marriage problems, but Queen Elizabeth summoned the royal couple to Balmoral to, once again, intervene in their marriage. Prince William and Kate had separated in September of 2014 for nearly a month before the Queen stepped in to prevent another divorce as Kate was already pregnant with Princess Charlotte. But, noticeably absent in the royals’ lives is Carole Middleton.

Kate’s mother has been a key part of the Duchess’ life. Carole has been the unyielding force that helped Princess Kate orchestrate a royal revolution that constantly broke protocol and anchored the entire Middleton family into the royal family. However, Carole has been very quiet as Kate became reclusive after giving birth to Princess Charlotte. Has Queen Elizabeth finally put her foot down and ended the March of the Middletons by banning Carole Middleton from Kate, William, Prince George, and Princess Charlotte’s life?

The next few weeks of Kate Middleton’s life should be interesting. The Duchess of Cambridge is due to resume full royal duties this week, including an Anna Freud Centre school visit in London and attending the Royal World Cup. Perhaps the new hairdo isn’t helping Kate’s appearance, but her stress is evident and worrisome. Could Queen Elizabeth and the royal family be taking control of the Duchess and treating her as another Princess Diana? It’s unclear, but Kate Middleton’s return to the public eye after such a long hiatus just proved this NOT a happy woman.

What do you think is behind Kate Middleton’s aged and stressed appearance? Could the Duchess be enduring post-partum depression? Has Carole Middleton, Kate’s only trusted support system, been banned? Let us know what you think in the comment section below.