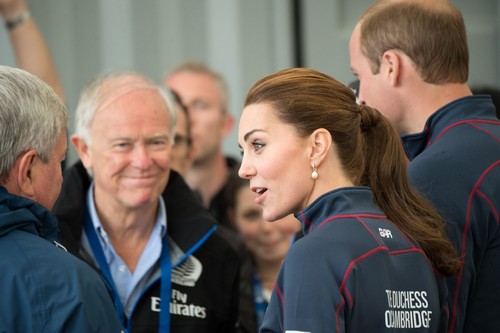 Kate Middleton rose to fame and power with her mother, Carole Middleton, calling the shots and manipulating her daughter’s way to royalty. Now that the Middletons have secured a spot in royalty, Kate is stressed out as Carole Middleton infuriates Queen Elizabeth and royal circles with her defiance and dominance. Are the Duchess of Cambridge’s family relationships suffering?

It wouldn’t be surprising if Kate Middleton is growing tired of being at the center of constant battles between her mother and the royal family. Carole isn’t afraid of Queen Elizabeth or Prince Charles, and loves to assert her growing power wherever she can. In fact, according to the Daily Mail, Carole’s diva attitude started before Kate even walked down the aisle. The Duchess’ mother commissioned Lindka Cierach to a make a dress suitable for her daughter’s wedding. After Lindka wouldn’t allow Carole to take the unfinished dress to her home so she could show it off to her friends, Carole refused to wear the dress and dumped the designer.

The dominate demands continued, and Carole Middleton made it very clear to Queen Elizabeth that Kate’s happiness is her first priority, according to Star magazine. The Queen was presumably stunned, but it didn’t stop Carole who has defied Queen Elizabeth on numerous occasions. She then planted herself as head of Anmer Hall shortly after Princess Charlotte was born. Carole also began making changes to royal tradition with Kate, portraying a middle class and family-oriented lifestyle.

Prince Charles was slowly being cut out of Prince George’s life, as Carole ran the young royal’s life. The mother of the Duchess would conveniently be out at public parks with George or have him down for a nap, effectively blocking Charles from seeing his grandson, the Daily Mail noted. Since then, Prince Charles and Queen Elizabeth appear to be fighting back. Prince George has been spotted spending more time with Charles at his country estate, People shared. Prince Charles and Camilla Parker-Bowles were absent for George’s Middleton-dominated second birthday, but made plans to stay with Kate, William, and the royal children the following weekend.

The strain of warring in-laws and parents must be overwhelming. Paired with the growing fear Prince William may repeat history, and get involved in a cheating scandal with his sexy doctor co-worker, the Duchess must be stressed out. Add James and Pippa Middleton sponging off of Kate’s status; Pippa has been attempting to secure a spot on ‘Dancing With the Stars,’ and it would be easy to understand how the Duchess’ family relationships might be suffering.

A huge sign all is not well between the Middletons, Queen Elizabeth, and royal circles was notable absences at Prince George’s second birthday. The Queen did not attend George’s party and sent Prince Phillip in her place. Queen Elizabeth’s excuses were not publically shared (she is the Queen after all), but royal insiders allegedly told Life and Style the Queen snubbed Prince George’s birthday party. The Middleton’s were offended, and both sides are feuding – again – planting Kate and Prince William in the middle. This will mean that the Duchess must put the reigns on her mother and bend to Queen Elizabeth’s demands, or continue to defy royalty.

What do you think of the latest Middletons versus Royals battle? Did Queen Elizabeth purposefully snub Prince George’s birthday party? Will Kate Middleton ever put a stop to the March of the Middletons?