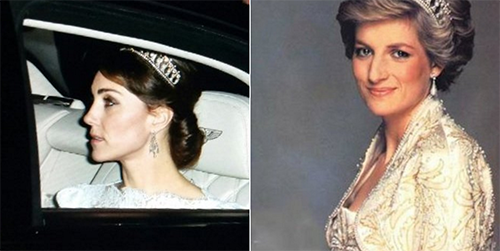 Kate Middleton dared to wear Princess Diana’s Lover’s Knot tiara! Was this a touching tribute to the mother-in-law the Duchess of Cambridge never knew? Or was it a manipulative move to undermine Camilla Parker-Bowles?

The Cambridge Lover’s Knot tiara was a favorite of Princess Diana’s and Duchess Kate wore the stunning pearl and diamond headpiece to Queen Elizabeth’s annual Diplomatic Reception. It appears that the Duchess of Cambridge was in a “recycling mood” on December 8. The white dress with the demure neckline worn by Princess Kate appears to be an Alexander McQueen design that she wore to the same event in 2013.

The tiara was a gift from Queen Elizabeth to Princess Diana when she married Prince Charles in 1981. This is the first time the public has seen anyone wear the tiara since Diana’s death in 1997. There is much speculation as to whether or not Queen Elizabeth has given the Love Knot tiara to Duchess Kate or if it was merely on loan for the night.

Did Prince William make a special request to Queen Elizabeth asking permission for Princess Kate to borrow one of the most talked pieces in the Royal collection? It doesn’t really matter how Kate Middleton ended up with the historic headpiece. Royal watchers are buzzing with wonder – was it worn as a tribute to the late Princess of Wales or a move meant to undermine Camilla Parker-Bowles place in the Royal family?

Is it possible that Queen Elizabeth allowed Princess Kate to wear the Love Knot as not-to-subtle signal that Duchess Camilla shouldn’t assume she’ll be the next Queen of England? One of the most historic, important and famous pieces of the Royal crown jewels will never, ever be worn by Camilla – was that the message Queen Elizabeth intended to convey to the Duchess of Cornwall?

Has the Cambridge Love Knot tiara sparked yet another Kate vs. Camilla feud? It really doesn’t matter if the tiara was on loan or a gift to Kate Middleton – Queen Elizabeth needed to grant permission one way or the other in order for the Duchess to wear the priceless Royal piece. And that probably infuriated Camilla Parker-Bowles! Wonder if Duchess Camilla gave the Prince of Wales an earful after seeing Diana’s tiara atop Kate’s head.