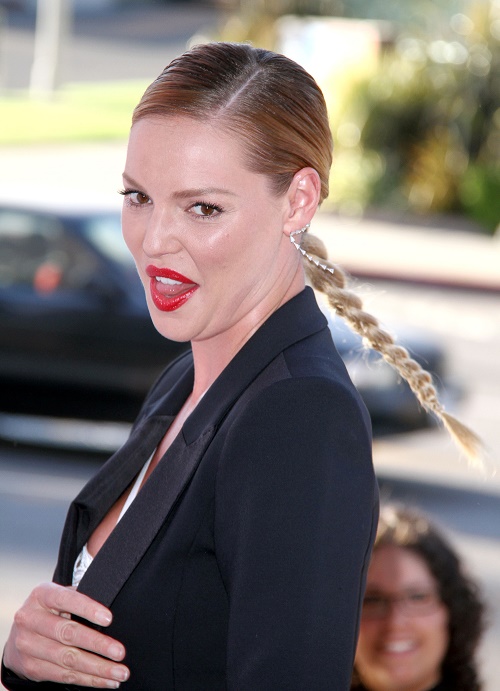 Katherine Heigl has always been a bit of a diva, and numerous Hollywood bigwigs have claimed that she is an absolute terror to work with. But is Katherine really the problem or is it her manager mother Nancy? You would think that being as high-profile and A-List as Katherine Heigl is that she would have hired a real manager by now. But the “State of Affairs” actress is still being pimped out by her own momager – how Kardashianesque of her!

Katherine Heigl has suffered a slew of disappointments in her career, most recently her show “State of Affairs” bombing and then being snubbed by Shonda Rhimes when she asked to return to “Grey’s Anatomy.” And that’s not even counting her less-than-stellar movies over the course of the last few years. Katherine Heigl seems to think that Nancy is the driving force behind her sinking career – and she is going to fire her own mom!

The July 27 edition of OK! Magazine reveals, “Nancy isn’t a producer, or really even a manager – something that she admits herself. But she thinks that she has a right to make decisions and she has angered a lot of people in the process. Katherine doesn’t know when to stay quiet and she has damaged her reputation, and her mother encouraged that behavior. She is very close to her mom, but she knows she needs to salvage what remains of her career with someone else – that is if anyone else will take her.” According to OK! Magazine’s inside sources, Katherine’s mother Nancy is actually the driving force behind her feud with Shonda Rhimes – Nancy reportedly dissed the show’s writing, which did not go over well with the show’s creator Shonda.

At this point, even firing her momager Nancy might not be able to save Katherine Heigl’s career – but hey anything is worth a shot. How do you think Nancy will take the news? Do you see Katherine making a comeback some day and getting back to the top, or should she just quit now while she still has a few shreds of dignity? Let us know what you think in the comments below!