BY Kristine Francis on November 29, 2015 | Comments: one comment
Related : Keeping Up With The Kardashians, Reality TV, Recap, Television, TV 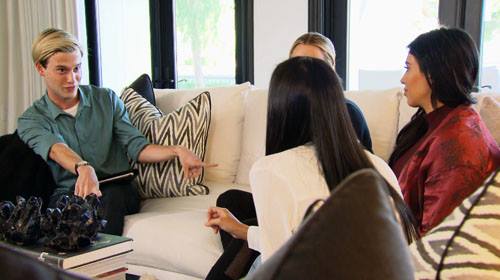 Keeping Up With The Kardashians returns tonight with an all new Sunday November 29, season 11 episode 3, called “Rites of Passage” and we have your weekly recap below. On tonight’s episode, Kris Jenner decides to throw an extra-special graduation party for Kylie Jenner and with Kim Kardashian being pregnant again, there are lots of cravings.

On the last episode, Kourtney tried to establish a new status quo with Scott, but the rest of the family feared she’ll give in to him too easily. Meanwhile, a business trip to Australia had Khloé thinking twice about how much she did for her sisters; and Kris braced for returning houseguests Kim and Kanye. Did you watch last week’s episode? If you missed it, we have a full and detailed recap right here for you.

On tonight’s episode per the E! synopsis “Kris decides to throw an extra-special graduation party for Kylie; Kim’s pregnancy cravings take her halfway around the world, but it could be putting her at risk; Khloé responds to a presence in her house by getting in touch with her psychic side.”

Tonight is going to be another crazy episode that you won’t want to miss and neither do I, so be sure to tune in for our live coverage of E!’s “Keeping Up With The Kardashians” tonight at 9PM EST! Meanwhile, while you wait for our recap hit the comments secton and let us know how excited you are about this season of KUWTK, what has been your favorite part so far in this eleventh season?

Kris has had it tough for the last six months. Her ex-husband and father of two of her children had come out as transgender. And so that was a lot for Kris to take in much less grow accustomed to.

However Kris’s circumstances have changed on tonight’s episode of “Keeping Up With The Kardashians” because for once things weren’t either about her or her daughter Kim. It was finally about her youngest who was close to graduating high school without anyone seeming to notice or care.

So Kris decided to shake off her funk and do something for her daughter. She later enlisted her older daughters’ help in throwing a graduation party and it’s not going to be any old party. Kris wants to have a mock graduation with a commencement speaker and aisle in which Kylie could walk down. And as an added touch she wanted to include Kendall in the festivities by having the two sisters walk down the aisle to receive their respective diplomas.

Apparently Kendall also didn’t get to the typical ceremony because she too was homeschooled but, by trying to make it up to her youngest, Kris had somehow made Khloe jealous of her sisters. It seems Khloe hadn’t gotten a graduation party and so she couldn’t help noticing how extravagant Kris was making a party out for Kylie to be. So Khloe was using Kylie’s party to get some of things that she would have wanted.

But when Khloe wasn’t wrapped up in party planning, she was busy trying to speak with ghosts. That’s right with ghost! Or in her case with one ghost in particular.

Khloe has said that she hears a whispering male’s voice at night and that the voice sounded familiar to her. So Kourtney chose to be at her sister’s side when Khloe later sought out a medium. And based on what Tyler Henry had to say, the girls had gotten teary eyed believing the ghost that was in Khloe’s house was actually their father Robert.

Yet that wasn’t something Tyler could either confirm or deny. Therefore Khloe had to turn to another medium to get a name and finding out her grandfather had been the one watching over her had hurt. Khloe had loved her Papa Harry, but the person she truly wanted to have some communication with was her dad.

So Khloe asked the medium if she could reach out to someone on the otherside and that’s how she was eventually in contact with her dad again. And her conversation with Robert did come across as legitimate. For one, the medium knew that Robert used to tell Khloe that he loved her from the moon and back.

And for another, the medium had mentioned how important the month of July used to be Robert. So Khloe asked her mother about it and Kris said it was her anniversary.

Thus, all in all, Khloe was left with the feeling of having communicated with her father and it just turned her whole day around. And did the same for Kris as well.

However Kris had the option of being a bigger person when it came to her other children’s father and chose to make a decision that ended up injuring the relationship that Caitlyn Jenner has with her kids. As many of us saw on I Am Cait.

As things goes, Kris wasn’t the one that wasn’t ready to see Caitlyn at the girls’ party and that part would have been fine. But she then took the added step of simply not inviting the other parent despite knowing how much their father being there would have mattered to Kylie and Kendall. And to make matters worse – Kris also didn’t bothering forewarning Caitlyn so that it wouldn’t come as a surprise to the other woman to find out there was party for the girls and that she just hadn’t been invited.

So it was mistakes all around and the only good thing to come out of the party was the fact Kendall, Kylie, and even Khloe got to wear caps and gowns. And ok they also felt special.