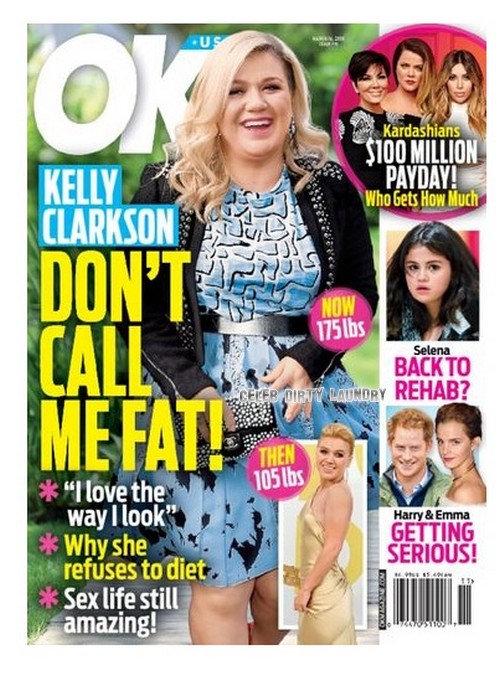 Kelly Clarkson gave birth to her daughter River in June 2014, and has stirred up a slew of controversy over her “baby weight” – which she still hasn’t lost. It seems like every time a celebrity pops out a baby, they step out a week later and look as if they were never pregnant. So, the media is having a field day with the fact that country music singer Kelly Clarkson is still carrying around 75 pounds of excess “baby weight” and appears to still be gaining – not losing the extra pounds.

The March 16th cover of OK! Magazine is plastered with the least flattering photograph of Kelly Clarkson that the tabloid could get their hands on and the title screams, “Kelly Clarkson: Don’t Call Me Fat!” The OK! cover goes on to reveal that Clarkson is embracing her new body despite all of the fat-shaming she has endured as of late, she refuses to diet and claims her sex life with husband Brandon Blackstock is “still amazing.” Obvious OK! had to include a comparison photo of Kelly Clarkson when she was at her thinnest – and only weighing in at 105 pounds.

In other celebrity gossip news, this week’s edition of OK! Magazine teases a story on the Kardashian family’s $100 Million TV deal and promises a break down of how much each reality TV star is being paid. Because you know we totally want to spend our day learning how much the talentless family is being paid to do nothing – that’s not depressing at all. On the up side, OK! reveals that romance is in the air for Prince Harry and Emma Watson, we’re not going to get too excited though considering the Royal Bachelor’s track record.

The March 16th cover of OK! Magazine also claims that Selena Gomez is headed back to rehab. We’re a little baffled seeing as how Selena seems to be the most put together now than she has been in the past three years. Selena and Zedd are reportedly nauseatingly happy, her new single “I Want You To Know” is blowing up, and she seems to no longer be partying 24/7 with Justin Bieber. So, if you know why Selena Gomez is going to rehab – please feel free to enlighten us in the comments section below.