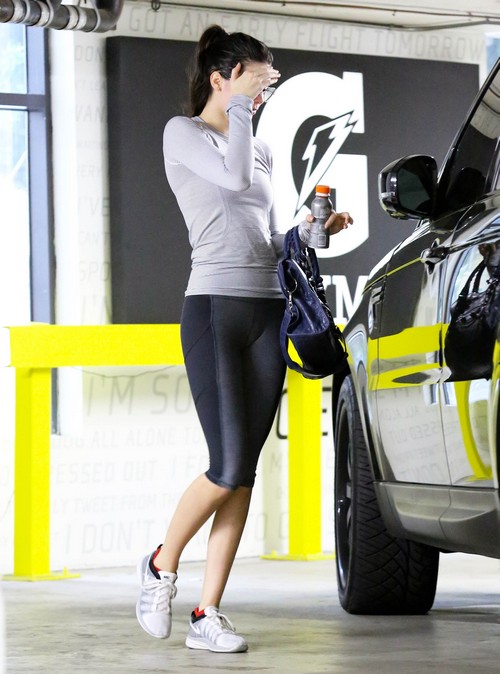 Keeping Up With The Kardashians star Kendall Jenner may have found supermodel fame and become the new face of Estee Lauder, but her overwhelming acne might force her to slow things down. Photos below show Kendall Jenner leaving the gym and trying to hide what could be acne on her face from the photographer. Apparently, Kendall Jenner has a serious acne problem, and she can’t seem to stop breaking out all over her face. Kendall’s momager Kris Jenner, always the optimist, has a plan though – instead of hiding her zits, Kris wants her to embrace them – so she can the next celebrity face of Proactiv.

According to the January 26th edition of OK! Magazine, “As the new face of Estee Lauder, Kendall Jenner shocked onlookers when she stepped out on January 2nd with visible blemishes. But while the embarrassed teen tried to hide her imperfections, mom Kris Jenner saw an opportunity to cash in. Kris immediately told her to approach Proactiv, in hopes of becoming a spokesperson.” A source close to the reality TV family told OK! Magazine, “It took everything Kendall had not to tell her mom where to go!”

Honestly, we’re not even surprised by Kris Jenner’s brash and greedy parenting anymore. It seems the Keeping Up With The Kardashians star will stop at nothing to make a few extra bucks, regardless of how much it mortifies her children. If Kris truly cared about Kendall’s modeling career, she would know that joining a teen acne campaign would be career suicide for Kendall – who is working night and day to gain respect as a high-end fashion model. There is no way Estee Lauder would be cool with the face of their company also being the face of an acne medication. But Kris doesn’t care if Kendall commits career suicide and destroys her image – if it means a couple more dollars for her.

Do you think that Estee Lauder will reconsider hiring Kendall if she doesn’t get her acne under control? How greedy is her momager, Kris Jenner, for trying to get her to sign on with Proactiv so that she can cash in on her daughter’s embarrassing skin problems? Let us know what you think in the comments below!

Kendall Jenner tries to hide her acne leaving the gym, by FameFlynet