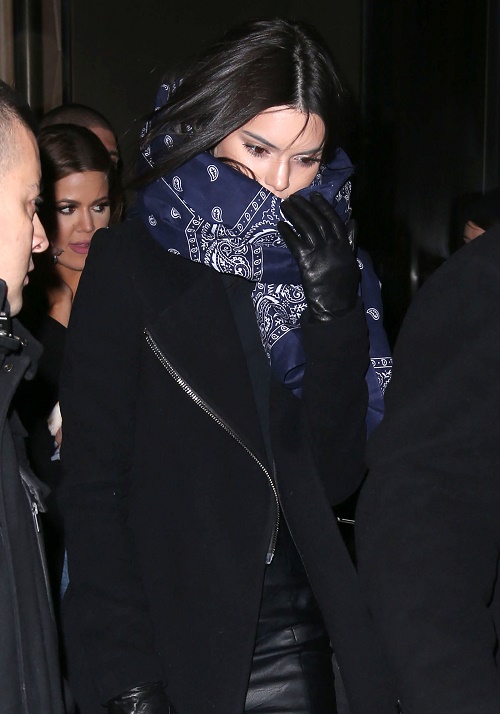 Kendall Jenner’s modeling career is continuing to take off like gangbusters, but it looks like her Kardashian roots are still holding her back – at least, in the eyes of the other models. There have been several unsubstantiated rumors about Kendall Jenner getting bullied and made fun of behind-the-scenes of all her modeling gigs, but we finally have some proof of the aforementioned bullying.

There’s a picture circulating from Vogue German’s Instagram, showing Kendall Jenner backstage at a Donna Karan show during New York Fashion Week. While the picture shows Kendall looking particularly waxy/frozen, the majority of the comments on the photo are positive and encouraging. However, two models decided to have a little fun at Kendall’s expense. One model by the name of Lexi Boling wrote, “She’s never looked better,” whereas another one, Binx Walton, wrote, “That’s f***ed up.” Both of them accompanied their comments with crying/laughing emoticons, which is obviously their way of laughing at Kendall Jenner.

Of course, they probably didn’t realize that this story would get so much publicity, since Lexi Boling’s rep then released a statement saying, “I wasn’t thinking and made a silly comment. Kendall’s had a killer NYFW. A big congrats to her!”

Oh, come on. Lexi Boling and Binx Walton meant what they said, and they should stick to their guns. There’s clearly a consensus among most top models that Kendall Jenner has only gotten to where she is because of her Kardashian family name, not because of her modeling talent. Just because she has a modicum of talent in that regard doesn’t excuse the nepotism involved in getting her there, and obviously, these girls agree.

What do you guys think about Kendall Jenner getting bullied at New York Fashion week? Do you think it’ll die down if Kendall sticks around for a few more years, or will the other models continue to harass and passive aggressively humiliate her? Let us know your thoughts in the comments below.