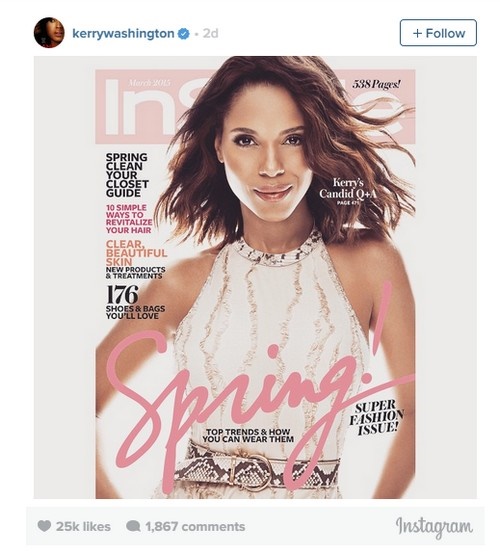 Magazines have a very, very bad habit of lightening the celebrities in their issues, to the point where these celebrities don’t even look like themselves. Moreover, African-Americans, Indian-Americans, and anyone that’s ‘brown’ or ‘black’ skinned have to face this Photoshop tool, because more often than not, these magazines are racist and/or giving into the racist pressures of the industry. It’s a white, white world in Hollywood, and minority celebrities are part of that.

The latest Photoshop controversy comes via InStyle Magazine’s cover of Kerry Washington. Not only have Kerry’s facial features been ridiculously altered, but she has been so whitened that she doesn’t even look African American anymore. Literally, she could probably pass off as a Latino or a really tan white American on that cover, if she really wanted to.

Anyway, the cover image went online this week, and was immediately met with a wave of backlash. Many of Kerry’s fans were upset and disappointed that a high-profile magazine like InStyle would lighten someone this way, especially someone as well known and well respected as Kerry Washington.

But, you know, sometimes this sort of vocal online backlash has the result we desired – or at least, will result in some semblance of an apology. InStyle released a statement on Thursday saying, “We have heard from those who have spoken out about our newsstand cover photograph, concerned that Kerry’s skin tone was lightened. While we did not digitally lighten Kerry’s skin tone, our cover lighting has likely contributed to this concern. We understand that this has resulted in disappointment and hurt. We are listening, and the feedback has been valuable. We are committed to ensuring that this experience has a positive influence on the ways in which we present all women going forward.”

Well, they denied digitally lightening Kerry’s skin tone, which I find hard to believe. But at the same time – even if they deny the Photoshop – at least they’re admitting that they’re going to take it into consideration next time. If enough people cause an uproar over ridiculous Photoshop situations like this, then it’s bound to change, right? Maybe. Hopefully.