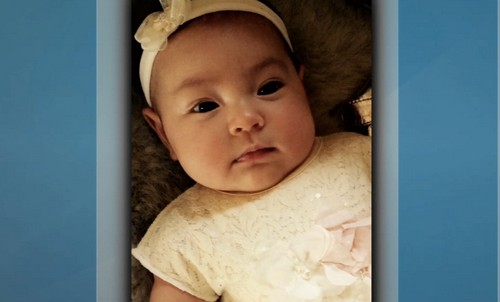 Kevin James has shared the first photo of his new baby girl Sistine Sabella during his appearance on Live With Kelly and Michael on Monday April 13. The actor showed off two pictures of his adorable baby girl, who is now three months old. After the two hosts said how cute she was, James jokingly added, “She’s talented too; I got to be honest. I got her working on a Robert De Niro impression. She’s like her father, she cries when she wants to eat,”

Kevin James and his wife, actress Steffiana de la Cruz, are now the parents of four children. Their three daughters are Sienna Marie, Shea Joelle, and Sistine, while their only son is Kannon Valentine.

How is Kevin doing with four kids? He opened up to the Today show about parenting after they welcomed their third child. He said, “You kind of loosen up with the second child a little bit, which is nice. The first child, I remember they just give it to you at the hospital, you’re supposed to put her in the car seat and dive home…I was 10 and two on the wheel, in the right lane, 30 miles an hour, on the highway, with the flasher going…Second kid, I had the top down and I was steering with my knees.” We love his sense of humor and bet James makes a great father.

Being a father of four has not stopped James from working either. Fans will be able to watch him in Paul Blart: Mall Cop 2 on April 17, as well as hear him, as the voice of Frank, in Hotel Transylvania 2. James says that his kids love traveling too. “They travel everywhere. They’re great travelers,” he told Ripa and Co-Host Michael Strahan.

Congratulations to Kevin James and wife Steffiana de la Cruz on their fourth child. Wishing them all the best with their family.