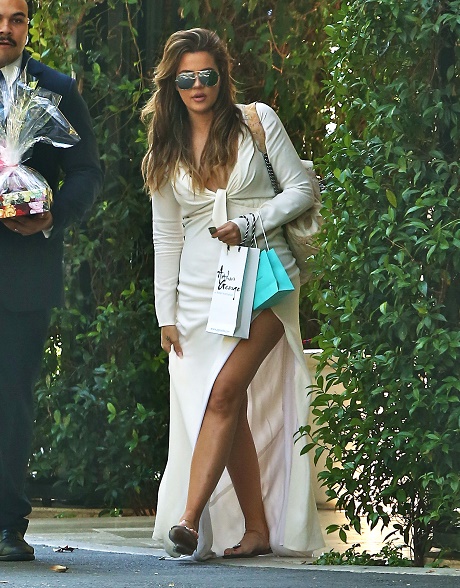 Does Khloe Kardashian have a new boyfriend? The Keeping Up With The Kardashians star is technically still married to her estranged husband, Lamar Odom, but that isn’t stopping her from dating NBA player James Harden. Although there is some questions about whether they are dating – or merely having a lot of sex. Regardless, Khloe and James’ relationship could be what puts Lamar Odom over the edge, considering he is not doing well after the drug-related deaths of two of his close friends this month.

According to a new report from Star Magazine, Khloe recently jetted off to Hawaii and stayed at a ritzy hotel for seven days. The KUWTK star took her BFF Malika along with her as a rouse, but the vacay was for from the “girl’s trip” that Khloe claimed it was. Apparently, Khloe spent the entire trip in James Harden’s hotel room and the hotel staff spotted her on his balcony in nothing but a towel.

Khloe Kardashian is supposedly working tirelessly to get her estranged husband Lamar Odom into rehab so that he doesn’t suffer the same fate as his pals Bobby Heyward and Jamie Sangouthai. The last thing she most likely wanted was her hot and steamy romance with Houston Rockets’ player James Harden to go public. Lamar is definitely in a vulnerable place right now, and it’s no secret he is still in love with Khloe – despite their bizarre marriage and alleged divorce. Odom just lost two of his best friends. Can he handle losing his wife to another professional basketball player?

According to the report in Star Magazine, Khloe and James are just “friends with benefits” at this point. Do you think that Khloe and James will be official soon? How will Lamar Odom handle the news, will it push him over the edge? Let us know what you think in the comments below!