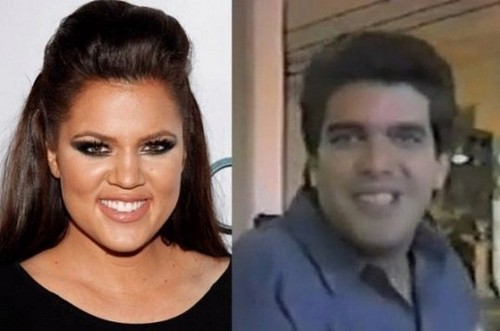 Khloe Kardashian has changed everything about her look over the course of the past year. Now that she looks like a new woman, is Khloe trying to put those Alex Roldan paternity rumors out of everyone’s head?

There has been speculation for years about who Khloe’s real dad is but the youngest Kardashian still insists that Robert Kardashian fathered her as well as Kourtney, Kim and Robert, despite all evidence to the contrary. Many have suspected that either O.J. Simpson or Alex Roldan might be responsible for fathering Khloe.

The odds for either man being Khloe’s dad are pretty good too. Kris Jenner admitted to having an affair with O.J. Simpson just about the same time she ended up pregnant. Although Kris never admitted to an affair with Alex Roldan, he was Jenner’s hairdresser for years. Not to mention that the shocking resemblance between Alex Roldan and Khloe Kardashian is uncanny.

Kris Jenner has admitted to having multiple affairs while married to Robert Kardashian, including flings with O.J. Simpson and Todd Waterman. Kris and Alex also had a fling several years ago and the timing of their relationship coincides with the time that Khloe was conceived.

For years, Khloe has been compared side by side to O.J. Simpson and Alex Roldan while people tried to figure out who really is her father. Khloe is often compared to Simpson’s daughter Sydney. Khloe and Sydney do look like they could be sisters just as much as Khloe resembles Kourtney or Kim. Khloe never resembled Kourtney or Kim much either. She isn’t petite like the older two and her complexion is totally different as her facial features. Kourtney and Kim naturally have silky, very dark brown hair while Khloe’s hair is a much lighter brown.

When photos of Khloe Kardashian and Alex Roldan are compared though, they look almost identical. Well, they did look identical anyway until Khloe changed everything about herself. Not only is Khloe toned up and in much better shape, her face and hair have changed as well. Khloe’s features look more delicate than they used to and she’s starting to resemble the other Kardashian women a lot more.

Star is reporting that Khloe Kardashian spent around $3 million changing up the way she looks. They claim that most of that fortune was spent on plastic surgeons who completely transformed Khloe with a nose job, breast implants, a butt lift and liposuction among other procedures. Now that Khloe has had all this work done and changed up her look, the similarities between Kardashian and Roldan are becoming less obvious.